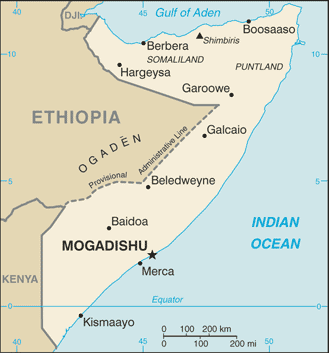 At least five people have been killed in an attack claimed by al-Shabab in the Somali capital, Mogadishu on Friday July 10.

The militants attacked two hotels, the Wehliya and Siyaad, said the BBC, which are reportedly among some of the best known hotels in the city.

Moalimi Mohammad of the BBC, reported that the attack on the two hotel came when people were breaking their Ramadan fast.

An al-Shaba spokesman told Reuters that “Car bombs rammed into the hotels named Wehliya and Siyaad. Then our fighters stormed in.”

The BBC reported that at the time there were conflicting reports as to what had actually happened, some were saying that the fighting was continuing whereas Somalia’s National Intelligence and Security Agency had tweeted that the attacks had been stopped.

Abdirizak Omar Mohamed, Somalia’s minister of internal security, said in a statement that a total of 12 gunmen had been killed in the shootouts.

A mortar attack on the African Union base in the city was also carried out at the same time.