Home>African Future>Solving the deadly voyage across the Mediterranean – the African way
By AT editor - 23 July 2015 at 4:28 pm 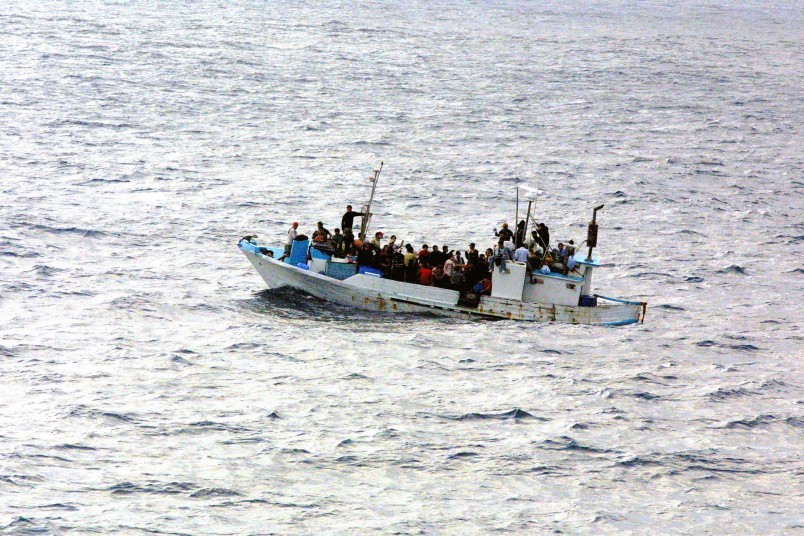 Since 2015 started, an estimated 3,000 people have already perished trying to cross the Mediterranean Sea. These people are a mix of economic and political migrants looking forward to reach Europe in search of a better life, or even just a refuge from the uncertainty brought about their countries’ political climate. While the international community has its eyes set on the European Union (EU) in solving the migrant crisis, Africa also has a stake in curbing the problem.

Europe has always been considered as a land of migrants. During the colonization years, countries from Western Europe had a race to colonize as many territories as possible, annexing one country after the other, and leaving their influence in every corner of the globe. During the 20th century, Europeans had also emigrated en masse to America, which in large part was due to the advent of trans-Atlantic liners.

Africa, on the other hand, has an older record of migration. It dates back from prehistoric movement of primitive men out of the continent, arriving on new continents and islands to thrive. Fast forward to the present day, one might be compelled to think that the same economic factors may apply. However, around a hundred thousand years ago, one thing did not exist in the migration question. It is the existence of sovereign states.

The absence of political restrictions when man first moved out Africa is no longer observable on the influx of migrants in the Mediterranean. While some places like Lampedusa, Italy are more open to arriving migrants, the same thing could not be said of the EU as a whole. Since the 2007 financial crisis that swept across the union, there has been a growing anti-migrant sentiment in the region. The arrival of new wave of migrants has furthermore strengthened this reaction, as illegal migrants are either viewed as an unnecessary burden to a host country’s resources or not productively contributing to its economy in the long run.

While the EU is party to the 1951 Refugee Convention granting asylum to political refugees and implements the Common European Asylum System (CEAS), it could admittedly not distinguish legitimate asylum seekers from other economic migrants. As a result, a lot of these people adrift to sea were begrudgingly helped my EU member states, as setting foot on their soil may initiate a long bout of asylum process.

The causes of migration are indeed complicated. The interplay of both economic and political factors exacerbates the application of asylum and refugee laws to these African migrants. United Nations (UN) officials estimate that out of the total migrant population, 20 percent is considered refugees. Half of this number came from African and West Asia.

In migration, there are three concepts that could bring light in understanding the process. First, these are the push forces. These forces include civil unrest, environmental degradation, and high unemployment rates that push migrants to emigrate from their home countries. Second are the pull forces, which include the presence of better economic opportunities attracting migrants to cross national boundaries. Lastly, informational networks are provided by families, friends and other labor contractors who supply information on migration mechanics.

Given these concepts, African governments, particularly through supranational regional organizations, can slowly address the migration crisis. Radical changes in the migrants’ countries of origin must be implemented for the migration crisis to stop. From West Africa to the Horn of Africa, most of the migrants come from countries afflicted by uncertain political conditions and absence of employment opportunities. Migrants from Somalia affected by the al-Shabaab crisis, and Eritrea with its repressive government are forced to go northward to Libya before making the trip to Europe. Libya and its porous borders provide easy entry for foreigners, as well as its proximity with Malta and Italy making it a popular transit country. Unless the situation in the countries of origin are abated, or a more stringent border control be imposed within Libya by the African Union, citizens would continue to move out.

Interestingly, Nigerians form a large part of these migrants. Given that the country is currently the number one economy in Africa in terms of Gross Domestic Product (GDP), the situation is significant as the pull forces of perceived better economic opportunities in Europe continuously draw Nigerians. Nigeria is the most populous nation in the continent, with the poverty rate rising. About 100 million Nigerians are estimated to be living for less than a dollar a day. Also, around 60 percent of Nigerians are living in absolute poverty. Despite the booming oil industry, the economic benefits have not trickled down to its citizens.

Culturally, the United Nations Office on Drugs and Crime (UNODC) has also alluded to the cultural perception in West Africa attached to a European migration. A family member reaching Europe, regardless if done legally or illegally, is pulled by the migration’s social value even if his situation ended up worse than that of his country of origin. Again, if more importance would be given in achieving inclusive economic growth within the countries of origin, then the pull forces would be mitigated.

The presence of kinship and transnational communities in the destination countries also provide more incentive for would-be migrants to continue with the perilous cross. Family members who have successfully reached the receiving countries provide informational networks, perceivably reducing the risks involved in moving from one country to another. While little could be done with the existing family-based networks, countries of origin must implement stricter policies to eradicate groups providing mechanisms for the migrants. A related and equally pressing problem linked to these groups is the risk of human trafficking. In close collaboration with organized crime groups, and sometimes under the guise of promised employment opportunities, migrants willingly pay with their life savings just to cross the Mediterranean. While the United Kingdom has already begun sending operatives to break these groups, local African governments must also look out for the presence of these groups within their own borders before they start recruiting.

Africa has a large role to play in solving Europe’s migration crisis. On one hand, the illegal entry of the migrants to Europe threatens to break down its social cohesion, as compared to a legal means of migration. On the other, it portends the deepening crisis within the countries of origin as it drains potential human capital to help realize its own inclusive economic growth. The crisis is not only Europe’s problem. Africa, through its various regional blocs, must have the political will to treat the crisis as its own problem.