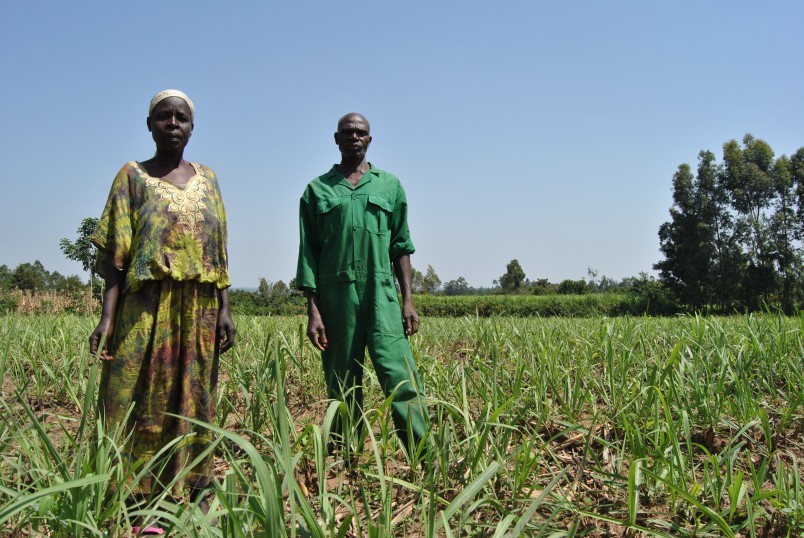 Faced with high costs of production and delayed payment for their harvest, Kenya’s sugarcane farmers have vowed to uproot the crop.

NAIROBI, Kenya—President Uhuru Kenyatta’s recent trade deal with President Museveni of Uganda to allow Kenya to import sugar from Uganda has attracted criticism and shifted focus to the ailing sugar sector and plight of sugarcane farmers in the country.

According to Michael Arum, a coordinator at Sugar Campaign for Change (SUCAM), there is a myriad of problems threatening the existence of the sugar industry in Kenya and eroding the farmers’ fundamental rights. Arum points out some of the problems facing the Kenyan sugarcane farmer; inflated cost of farm inputs and services and low cane price and delayed or non-harvest of sugarcane. Arum says that there is an arbitrary falsification of deductions on farmers’ statements and weighbridge records going on in sugar millers in Kenya and therefore condemning the sugarcane farmer to a life of poverty.

“In Kenya sugarcane farming is not about trade but rather about uplifting the standards of living of the people by being the major if not the only source of their livelihoods. The industry is intended to promote rural development through direct participation of the rural families in the sugarcane growing zones,” said Arum. He believes that conflicting policies and incoherent regulatory framework within the sugar sub-sector have resulted in failure to uplift the living standards of sugarcane farmers.

There are 300,000 cane farmers, 4,500 of which are large scale while the rest are small scale. The out growers farm on 189,390 Hectares while millers control 14,340 Hectares. Mumias Sugar Company is the biggest sugar miller in Kenya and provides services like land preparation, fertilizer/input supply, extension support, harvesting and transport to over 110,000 farmers in Western Kenya. Mumias Sugar Company contracts almost half of all cane farmers in Kenya.

Alfred Odwori, 68, a farmer from Buchifi village in Mumias decries the high transport costs that Mumias Sugar Company charges to transport his cane to the factory. He believes that there was a mistake or a deliberate ploy to swindle him. Mumias Sugar Company deducts up to 40% of farmers’ cane proceeds to cover transport costs and harvesting costs. The sugar company harvested Alfred’s sugarcane in June and a month later gave him a statement stating that they will pay him 30 USD for 18.9 tons of cane. The company buys cane at a price of 32.75 USD per ton. Alfred expected more.

Moses Owino, the Communications Manager for Mumias Sugar Company explained that the high costs of transport are arrived at after negotiations with contractors and are computed per kilometer and so the further away from the factory, the more a farmer is charged.

The company charged Alfred 166.5 USD for transporting cane from his farm to the factory which is less than five kilometers away. “They had told us that they have reduced transport charges but it looks like they have increased instead,” said Alfred who depends on his two acre farm to send his grand children to school. He had hoped that the cane harvest could earn him enough to pay his grandson’s secondary school fees next year. “Next year, my grandson goes to high school and I have no other source of income. I don’t know what to do,” said Alfred.

Sixty six year old Wycliffe Kweyu, who is a father of eight, harvested thirteen tons in June this year from his half an acre parcel of land and in July he received a statement from the company promising to pay him 24 USD. Just like Alfred and many other farmers who sell their sugarcane to Mumias Sugar Company, he feels the 117 USD transport costs that were deducted from his 436 USD cane proceeds were too much. “This is too much, the factory is not far. I am in a zone which is four kilometers from the factory,” said Kweyu. His two daughters who are in secondary school have been sent home for school fees and Kweyu has nothing to give them.

Protus Odwori, 73, has been three times unlucky. Every time he plants sugarcane in his half an acre, he always still owes Mumias Sugar Company money after they have taken his cane. “Even when I use my own seed cane, my own fertilizer and plough the land myself, I still get a DR (debit),” said Protus. Mr. Owino says that the issue of DR comes about due to poor yield but Protus insists that this year’s yield was good. “I depend on sugarcane to pay school fees but now there is nothing,” said Protus.

Protus and Wycliffe both agree that the sugar company has inflated the transport costs in order to minimize the amount of money that it pays to farmers and thus reduce debts. They feel that it is not practical for the sugar company to deliver seed cane to farmers at transport costs that are ten times lower than what it costs to collect the harvested cane from the same piece of land.

Apart from the issue of high transport costs, farmers also feel that they are charged highly for harvesting. In the past, farmers used to harvest their own cane. However, Mumias Sugar Company has since taken over the harvesting of cane. They then charge farmers for harvesting. Alfred’s July harvest for instance cost him 52 USD for eighteen tons. He however feels that that was too high a price for harvesting. “The current wage to pay one harvester at the factory is 200 shillings (2 USD) per day. If I were to pay them it would cost me 1600 shillings (16 USD) for all the eight who came here. That is where they rob us, where they should deduct 1600 shillings they deduct 5,297 shillings (50 USD)” said Alfred.

In addition to these deductions, Alfred and Wycliffe have to wait for a whole year to get paid for their sugarcane. “Since I received the statement in August, I will receive payment in July next year,” said Alfred. For both of them, this makes an already bad situation worse. Wycliffe says that it is even more painful that he will have to wait for too long to receive the money. “My neighbor was paid just last month for sugarcane that was harvested last year,” said Wycliffe. He is waiting on his maize to dry up well so that he can sell it so as to pay his children’s school fees.

Mr. Owino, however disputes that payments will not take a year to be paid. He said that the company is currently paying out debts that it owed to sugar farmers. The company has been facing financial problems but was bailed out by the government in June. “The ones that we harvested in July and August will take a few weeks to a month but they will not take a year,” said Mr. Owino.

Alfred had hoped to get enough money from sale of sugarcane so that his son could build a decent house and ultimately move out of his grass thatched house. This did not happen. He is now faced with the dilemma of his grandson’s fees come January.

As a remedy for the sugarcane farmers, Arum calls on them to diversify at farm level to ensure increased income stream and to help mitigate shocks that liberalization creates. Farmers are already uprooting sugarcane for good in favor of maize. Mr. Owino acknowledges that this is going on and has affected the company’s supply of cane. “It is true that the supply of cane has reduced to some extent but we are addressing that issue,” he said. He said that the number of farmers who sell their cane to Mumias Sugar Company has dropped by 10,000 due to delayed payments. He is however confident that once they address issues of late payments; the dormant farmers will resume planting of cane.

For these farmers however, a future in sugarcane farming is bleak. Alfred used to plant sugarcane in one and a half acres but reduced to ¾ of an acre so that he could try his hand in maize farming. Maize does well in western Kenya and a farmer can plant and harvest maize three times a year in the same parcel of land.

It is because of the prospects of a better deal in maize planting that Alfred has vowed to uproot his sugarcane if Mumias Sugar Company persists with delayed payments and the high charges on transport and harvesting. “If it goes on this way, I will stop planting sugarcane. This is the last lot,” said Alfred. He says that many farmers in his neighborhood have shifted to maize due to frustration. “If it goes on this way, I will uproot all the sugarcane and plant maize,” said Wycliffe.