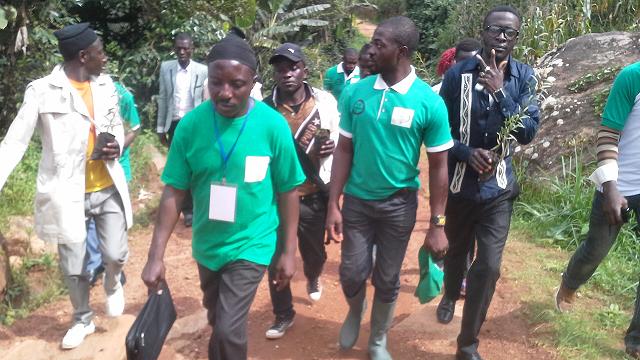 It is 10:30am in Luh village, North West region of Cameroon and a group of all green-dressed youths, members of the Wimbum students Union are bracing the drizzling rain to the sacred Luh forest for a re-forestation campaign.
‘We want to re-establish the natural greenery and environmental values of this sacred forest which happen to be fast disappearing due to climate changes and of course human activity,’ says Kari Jackson Bongnda, Executive Coordinator of Sustainable Run for Development, SURUDEV, a local NGO working on environmental protection and climate change in North West region of Cameroon.

Kari and his organisation have partnered with the local students union organisation and the local development stakeholders of the Nkambe area to plant over 1000 environmentally-friendly and water preserving trees in the Luh sacred forest and water catchments in the municipality respectively, as part of activities during its annual convention in Nkambe.

‘If you had the opportunity like some of us, to see this forest a decade ago and you happen to visit this place today, am convinced you will join the re-aforestation campaign with the least hesitation. With the fast rate at which the forest is disappearing, we thought it timely to join the Wimbum Students Union during their annual convention to sound an alarm bell that the youths must take action now to save the future,’ he adds.

Jackson and the WISU members in their campaign, ‘trees for generations’ plant 1000trees of diverse kinds across the sacred forest, water catchments and the Nkambe council premises. ‘This is part of the strategy, we need to build the capacity of youths to be able to take up local adaptation mechanisms that would counter the overbearing effects of climate change,’ Jackson says (as he smiles).

King Nfor Nkwi of Luh village, a respectable traditional ruler of the Cameroon’s grassfields reflects on how fast the sacred forest has lost a great portion of its valuable trees. ‘As a child growing up, we knew that this forest was not visited by anybody and at any time, it’s unfortunate that we gave a blind eye to its rapid destruction. It is sad that today the forest which once served as a reference for this village has been abandoned and modernity taken over virtually all of what used to be here in the name of our tradition. Am however glad that the idea to give meaning to the forest again is coming from the younger generation,’ King Nfor told me as he looks on.
Kanjo Emmanuel, a resident of the Nkambe-Bamenda roadside says the number of trucks that ply the Nkambe-Bamenda road with wood destined for construction, furniture and firewood for cooking in the region’s capital city, Bamenda leaves one with the impression that the Nkambe forests will disappear the next day.

In 2014, the Cameroon government said it was removing subsidies on cooking gas. The North West region according to statistics is the country’s most rapidly growing region with a geometric rate of urbanization. All these have increased the need for wood thereby increasing the pressure on the region’s forests.

Nyingchuo Hilary is the Executive President of Cameroon Journalists for Children's Health, a Media and communication specialist with over five years of experience in print and Multimedia reporting for mainstream media outlets and more recently the Daily Cameroon Journal where he is News Editor

He is very interested in producing compelling print and multimedia narratives for the development organisations and NGOS with the aim of garnering mainstream media exposure. He was the Chair of the Media committee of the 6th ICTforAfrica international conference 2014 that held at the Hilton Hotel in Yaoundé. He has been to a couple of African countries including Nigeria, South Africa and Ethiopia for major international gatherings in journalism and media. Nyingchuo was the Editor of the Focus newspaper; a publication of the Department of Journalism and Mass Communication of National Polytechnic Bambui between 2009/2010 where he wrote some of the hard stories in campus that put the integrity of some faculty members to questions He is a member of the North West Chapter of the Cameroon Association of English Speaking Journalists, CAMASEJ, member of the African Media leaders’ forum, belongs to the American based Society of Environmental Journalists and a member of the world Association of newspaper Editors. Nyingchuo holds a B.Sc in Journalism, an HND in Banking and Finance and is currently enrolled for an M.Sc in Digital Journalism with the ICT University, Cameroon campus.