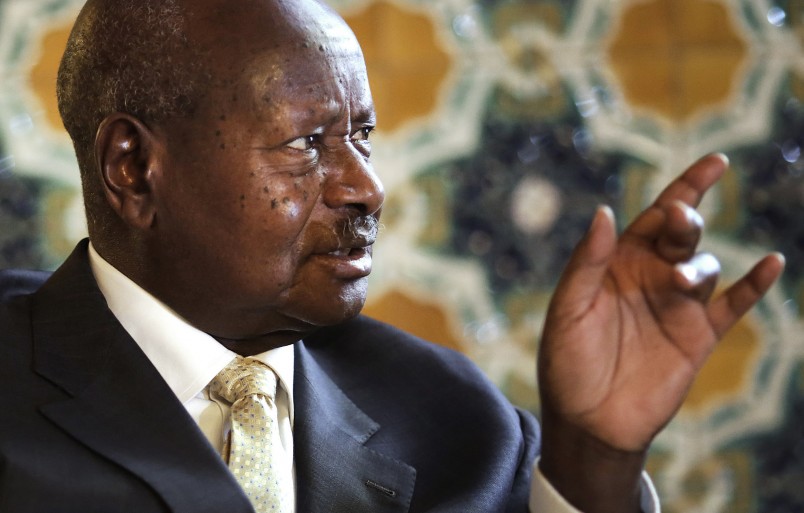 President Yoweri Museveni is gearing up for what is to be his fourth and possibly final run at the presidency next year, in a poll, where he will face off against an old ally and is causing investors to look warily at the small East African nation.

Museveni came to power in 1986 at the head of the rebel National Resistance Army (NRA), after a five-year guerrilla war.

Ally turned political rival Amama Mbabazi has been by Museveni’s side since he started fomenting rebellion against the government in the 1970s.

A fall out between the two men earlier this year, saw Mbabazi being dropped as Prime Minister, with the final parting of the ways coming with Mbabazi’s challenge for the leadership of the ruling National Resistance Movement (NRM) in June.

Mbabazi is not the first of Museveni’s allies to fall out with him so publicly. Kiiza Besigye broke ranks with the NRM and continued to run unsuccessfully for the presidency thrice since. Mbabazi famously chided him for “jumping the queue” when he first run for the presidency in 2001.

Museveni’s erstwhile wingman’s challenge has brought a new dimension to this year’s race.

Following his failed attempt to wrestle the party from Museveni’s grip, Mbabazi fell in with an opposition party attempt to front a single presidential candidate.

Last weekend the proposed alliance came unstuck, primarily because Mbabazi had managed to out maneuver defacto opposition leader Besigye from poll position, forcing Besigye to scuttle the much anticipated coalition and pledge to run for the presidency yet again.

Ironically, while courting the opposition Mbabazi has not denounced his NRM membership.

Political observers are divided over what a Mbabazi challenge will mean but have been forced to take notice after he muscled Besigye out of the way.

Mbabazi, Museveni’s former spy chief, known more as a back room operator than crowd pulling politician, has shocked analysts who doubted whether he could muster enough numbers to dislodge Besigye or even cause the Museveni camp some cause for pause.

Crowds of supporters who greeted him during a whistle stop tour of eastern Uganda, prompted a suspension of his “consultation” tour, by the Electoral Commission which said were full-blown campaign rallies before the legally stipulated time.

This show of popularity took the establishment by surprise, seeing as his expected political base would come from western Uganda, his home area and not the east where bad memories of the brutal suppression of a rebellion there in the 1980s by the NRM, linger.

Events in the east and his elbowing his way to the top of the opposition within a matter of months, suggest Mbabazi may prove the most formidable opponent Museveni has faced.

However one of the major fallouts of the campaign is that this may be the death knell for the old pre-independence parties and, in some people’s minds, cement the NRM dominance over the political space as next year’s major contenders will all be creations of the ruling NRM.

In the first 20 years of his administration political party activity was banned, which severely weakened the old parties. Under pressure from donors Uganda held a successful referendum to restore multi-party democracy in 2005.

However, the old parties have failed to impose their will on the political landscape, since 2006 winning less than a third of the seats in parliament, the proportion needed to prevent government from forcing through legislation.

It is expected that the NRM will again dominate the house, being the only party that can field a candidate in Uganda’s 400-odd constituencies.

According to the constitution a President cannot run for office if he is older than 75. Museveni made 71 earlier this month (September), which would make this his last term in office. However with a strong majority in the house the NRM can lift the age limit allowing Museveni to run indefinitely into the future.

It has been done before. In 2005 the NRM dominated parliament overturned a constitutional presidential two- term limit, allowing Museveni to run for a third term in 2006.

The uncertainty in the country’s politics has spilled over into the economy.

Bank of Uganda, the central bank has warned that they will not allow a repeat of campaign-related money supply expansion that led to record inflation figures, following the last election. In October 2011 inflation hit 30 percent a 19-year high whose repercussions continue to be felt throughout the economy.

Since the beginning of the year the central bank has raised the indicative Central Bank Rate by 500 basis points in reaction to the 25 percent slide of the shilling against the dollar. The result has been a reduction in credit and expectations that economic growth this year will fall short of the expected 6 percent to around 5.4 percent according to a World Bank report in September.

It is unlikely that there will be major economic policy shifts whichever of the three main contenders – Museveni, Mbabazi or Besigye, win, but Uganda has never had a peaceful transition of power from one president to the next, which history always causes jitters at election time.

Some adjustments may come with a Besigye victory, since he has alleged that there was a lot of corruption in the countries successful privatisation programs, but no fundamental departure from the private sector driven economy model has been factored in by political watchers.

The smart money remains on Museveni to win and for the NRM to dominate the house once again. Analysts, while acknowledging a growing resentment with the government, cannot see a comparable organisation to the NRM’s — which has taken 30 years to build, which would be the key to prying Museveni away from his hold on power.