Home>African Future>South Sudan conflict: what it means for the future of the country's youth
By Mohammed Yusuf - 8 October 2015 at 6:53 pm 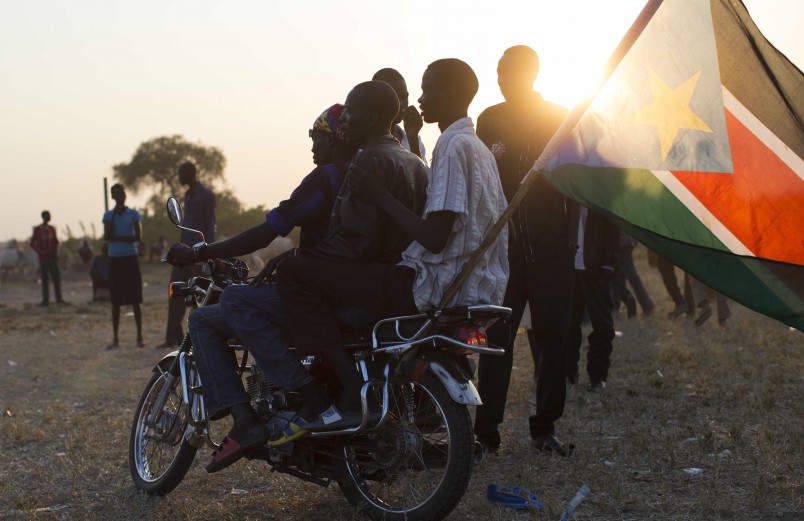 NAIROBI–From the relative safety of a University campus, Juliana Siapay, a 24-year-old South Sudanese student in Kenya, fears for her own future and that of her war-riddled country. At one point, her dream was so close to reality, until a set of circumstances conspired to rob her of her educational successes.

“It was like I have never been to school before,” said Siapay, whose effort to graduate from the Juba University campus in Khartoum ended abruptly in 2011. The sudden conclusion of her studies was due to South Sudan overwhelmingly voting in favour to separate from the Sudan as part of an internationally driven peace process.

“We went to campus one morning and we were told to submit our student Identification Cards–until further notice. That was it. It was the start of a yearlong wait for a call from the University in Khartoum. It was not coming. I decided enough was enough,” Siapay recalled.

It marked the beginning of a long journey for a decent education. Siapay ended up in Kenya, where she enrolled at the Daystar University, a private learning institution, home to hundreds of South Sudanese students most of whom have been forced out for not paying their tuition fees since early 2014.

There are fears most of those forced to drop out of University and other educational institutions in Kenya have secretly returned home to join rebels fighting against forces loyal to President Salva Kiir’s government.

“When I joined Daystar University in 2012, I did not have my result transcripts from Juba University. I had to start a fresh. It was like I had never been to campus before. It was a reminder that my age of 18-21 was all a waste. I have been trying to get some transcripts to prove that I did not waste that time.”

Despite Siapay’s tribulations in the search for a descent education, she remains one of the few students still able to continue with studies in Kenya, since the start of the 21-monthlong conflict, which broke out in Juba in mid-December 2013 with no end in sight.

Since then, there have been protracted peace talks between the government and rebels. The warring parties signed a peace agreement in August.

On Tuesday, rebels warned the government risks a return to conflict as it undermines a peace deal. Aid agencies report a surge in violence in the last couple of days.

Kujiek Ruot Kuajien, graduated in June, 2015 from Daystar University. He said his final year at the university he felt the pangs of pain inflicted by the ongoing war. His future in university swung from bad to worse, since his father was killed at the start of the war in December 2013.

“I got the news that my father was killed when I was sitting for my end of semester examinations in December 2013. It was hard for me to prepare for the examinations and so sad because I had not seen him for a very long time. I managed to pull through with some form of counselling. I finished the exams.”

Kujiek’s close friend faced a much worse fate after the outbreak of the conflict. He fled to join the rebels, under the leadership of the former Vice President Riek Machar.

“He was studying at a different University from Daystar. Life became so hard for him. He got money and went back home to fight for the rebels,” Kujiek told Africa Times in an interview. “When the war broke out, some of his people were forced to the camps, others joined the rebels, and there was no one to support him. He is still on the frontline. He told me he would be back to complete his studies if the war ends.”

“Our lives have been turned upside down by the choices of our parents,” Ajak told Africatimes. “Some parents are in the frontline fighting.”

Ajak said some of the students who have been unable to continue with their studies, due to the war, have been forced to return to the refugee camps in Kakuma, Northern Kenya.

The refugee camps, both inside and outside of the country, have been a centre of deep tribal divisions, leading to attacks that have left dozens of people dead.

“The future looks so bleak for many students. We fear that some bad people could contact these students and recruit them into the fighting. The refugee camps are also a centre of division that is similar to the divisions created by this war,” Ajak said.

After more than a year of struggling to stay at the University for a descent education, hundreds of the South Sudanese students are being forced back to join the war.

“I think most of those who left went back to South Sudan. Some are joining the rebel groups, the government forces or other militias if they are unable to get back to the refugee camps,” Ajak said.

As the war continues, the society also continues along a path of disunity. The conflict is taking a heavy human toll, those greatly affected are the South Sudanese youth who are still dependent on their parents who may be involved in the war and even murdered because of it, along with the constant struggle of delayed salaries.

Dozens of students rendered destitute by the conflict cite the looting of their parents businesses and the lack of foreign currency to send to Kenya for the payment of the school fees.

Yom Martin, a 23-year-old daughter of a South Sudanese civil servant, has not been spared by the conflict. The government has not been able to support her father who inturn cannot pay her university tuition fees which threatens her position at the university.

“Whenever I call my father to remind him of the school fees, he would usually tell me to wait because the cost of obtaining the US dollar has gone too high. There is no salary from the government and the ministries have instructed all workers not to publicly complain about the non-payment,” Yom said.

Ajak said the few still in campus in Kenya were the lucky ones.

“There are many students who have dropped out of school because they were depending on parents. The parents have fled the country because of the war, some have lost their jobs and are victims of this war,” Ajak said.

In an effort to continue with her education, Siapay, wrote a letter to Daystar University administration, asking for their cooperation.

“There is a population that came from the refugee camps and are not sure how to raise their school fees,” Karanja said. “There are those whose parents were financially stable before the war. The life since the start of the war is a different ballgame but we are all working together with their student leaders to see how they could be helped to clear the fees backlog.”

Siapay has faith that the University administration’s continuing empathy will help her remain as a student especially as she only has a few months to complete her undergraduate course.

Kujiek Kuajien, a graduate, whose uncle took over the family responsibility of paying tuition after his father was killed, said that circumstances have changed drastically in the last two semesters of his university education.

“My uncle has been forced to flee to Kenya. I have had to deal with a set of issues, my father being killed, my uncle fleeing to Kenya and being unable to raise the fees,” Kuajien said.

For Kuajien, the issue of peace is now more important than war.

“I have lots of words for our leaders but for now, I will give them just one…South Sudan belongs to all of us. They have to remember whatever decision they make, they should not just think of themselves. When you eat food today, it is not important as the food you will eat tomorrow, tomorrow’s food is more important and the future of South Sudan is more important than what they decide today. They have to bring us together and have a peaceful country,” Kuajien said.