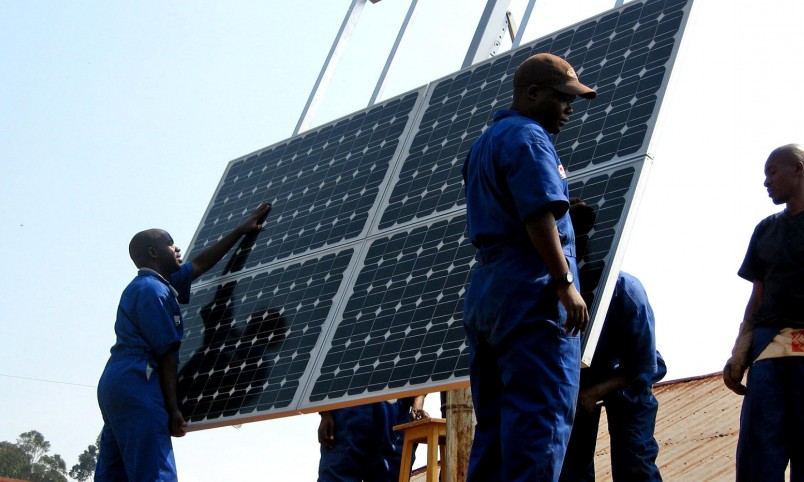 Three years ago, Rehema Kanama nearly left from her off grid rural home in western Uganda for a better life in the city. But the 35-year old single mother quickly changed her mind after signing a lease agreement with Solar Now, for a solar connection.

Today she no longer has to buy kerosene to light her home, a major relief for her three children who have in the past struggled for light to do their homework.

.”The children are very happy” she says. “I never imagined I would be able to live in house fully connected to electricity,”

Supported by income from her five-acre farm and a herd of around a dozen cows, Ms. Kanama is able to pay a monthly installment of $30 to Solar Now. After 18 months, she will fully own the system installed on her property.

In recent years, East Africa has been emerging as a lucrative market for alternative sources of power such as solar energy. This has been driven by the limited electricity infrastructure and the more of than not, constant sunshine.

The International Energy Agency estimates that 580 million people in sub-Saharan Africa lack proper access to electricity, with the electrification rate as low as 14.2% in rural areas.

In Uganda, figures from the Ministry of Energy and Mineral Development indicate that electricity access is at 16% nationwide and only 7% in rural areas. This indicates that less than half of Uganda’s population is on the grid, and many have to buy and burn kerosene for power.

This situation makes the region a big market for investments in alternative sources of power especially clean energy by both regional and international firms.

Solar Now, a Kampala based firm, has over the past five years, connected more than 10,000 rural households with electricity. The company offers a range of high-quality solar home systems and electrical appliances that are designed to fit the needs of low income rural households and small entrepreneurs.

“We’re not just a solar product company; we see ourselves as asset finance and distribution Company with a focus on renewable energy, and bringing together affordability and distribution” said Willem Nolens, CEO of Solar Now.

With over 45 branches country wide, Solar Now plans to expand to other East African countries. So far it has sold 6,100 solar systems. The average system costs US$800, but its most popular product costs US$500.

The Nairobi-based firm M-Kopa Solar is another company venturing into this emerging market. So far, the company has connected more than 250,000 homes in Tanzania, Uganda and Kenya, with the hope of reaching one million customers by 2018.

While buying a solar system saves users money spent on kerosene, the recurring argument is usually that solar energy systems are expensive for many rural households that struggle to save up enough money for this one off purchase. However, these companies have found innovative ways to make these solar systems affordable to the rural low income earners.

Solar Now is selling solar systems to rural households and businesses in Uganda with an 18-month credit facility in order to make them affordable.

In Rwanda, Gigawatt Global Company has succeeded in financing, constructing and interconnecting a $23.7 million solar energy field, the first of its kind in the region. The field is now supplying 6 per cent of Rwanda’s power needs.

Recently, the United Kingdom’s Department for International Development launched the Energy Africa campaign that aims at expanding the use of solar power across Africa as part of efforts to reduce millions of people without access to electricity.

Speaking at the launch of the campaign, former UN secretary general Kofi Annan said: “This campaign addresses one of the great injustices of the 21st century ‒ an injustice that robs millions of our fellow citizens of the dignity, opportunity and freedom that comes with access to modern energy.”