Home>African Future>Ugandans should wake up, smell the coffee and get rid of Museveni
By Patience Akumu - 17 November 2015 at 6:14 pm 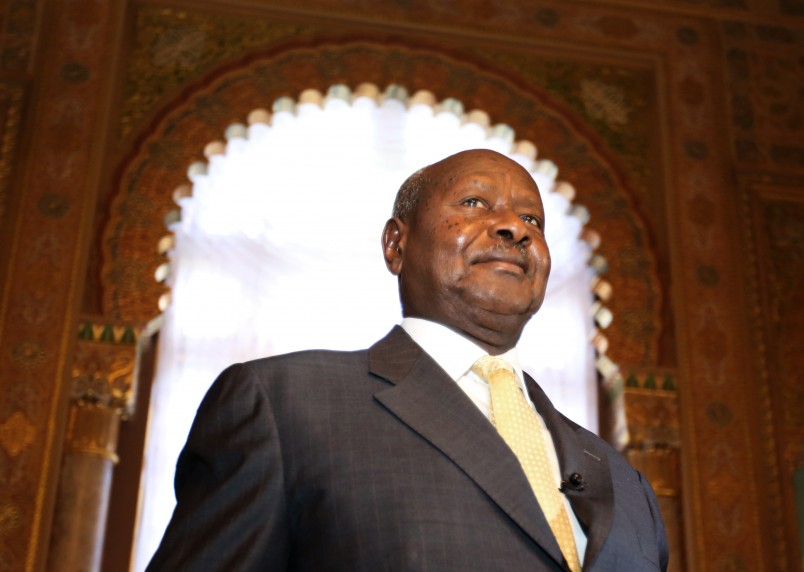 Elections, the vehicle that citizens are supposed to use to choose their leaders and effect the change they want, mean very little when the person you are trying to oust has spent decades entrenching himself as deeply as possible into power. This is a fact Uganda’s leading opposition leader, Dr. Kizza Besigye, knows too well, having tried his luck at unseating Yoweri Kaguta Museveni, Uganda’s president of thirty years, three times unsuccessfully.

With two impotent court decisions in his docket, recognizing that indeed elections have been systematically rigged against him but nevertheless declaring incumbent Museveni the rightful winner – and failing to provide Besigye a remedy – the opposition leader says 2016 is the year his attempts at the presidency come to fruition. His resolve is as un-boisterous as the peeling paint and cracked concrete of his office.

Museveni, alongside the likes of Robert Mugabe of Zimbabwe, Jose Eduardo dos Santos of Angola, Paul Biya of Cameroon and ICC indicted war criminal and Sudan President Omar Al Bashir, is one of Africa’s longest serving presidents. Come February next year, Uganda will hold polls that many critics believe Museveni is already guaranteed to win, with or without the help of the electorate.

Their resignation is partly borne of the fact that Museveni’s campaign posters, with various proclamations of him as the sole candidate of the National Resistance Movement party and savior of the impoverished citizens of the East African nation, have been up for over a year.  Opposition candidates like Besigye did not have the same privilege and in fact faced fines and legal action for putting up campaign posters of any sort.

Opposition campaigns were only allowed to kick off at the beginning of November, barely three months to the elections. Before then, the government effectively employed a mêlée of police, the army and other ambiguous security organs to dispel any crowds that gathered on account of opposition presidential candidates.

Besigye and Amama Mbabazi, former Ugandan Prime Minister and close ally of Museveni until about six months ago, considered the biggest threat to a sublime Museveni victory, were the major targets of state brutality. Besigye, who is the flag bearer for the Forum for Democratic Change, knowing too well the hopeless rollercoaster of violence that would await anyone who dared challenge Museveni, had in fact vowed not to participate in the election until reforms were made.

Today, seated at his office near Yusuf Lule road, an affluent neigbourhood in the capital Kampala named after a former president who served for only 68 days- the shortest term in Uganda’s history, Besigye sings another tune. Perhaps realizing that the policy and electoral reforms he demanded were but a mirage, he now calls for “a reform in the mindsets of the citizens.”

Listening to him talk about the country’s woes, from the desperate and poorly paid police, to the poverty ravaging the fast growing population, the dysfunctional health and education sectors, sucks you into his resolve that Ugandans should wake up, smell the coffee and get rid of Museveni at all costs.

His matter of fact tone, and the way he strolls out casually every now and then to check on opposition protestors having yet another running battle with the police outside his office belies the animated messages of defiance he is known for spreading. With every gunshot or scream, he shakes his head with no more than a bewildered smile.

“I think police has started teargassing them,” he says nonplussed. It is business as usual. The business of fighting for change.

But for a more cautious populace, the occasional violence is not a sign of change for the better. To them, it only portends a return to the historical post-colonial period of conflict and a negation of the peace the ruling NRM often reminds Ugandans it ushered in. The idea of an Arab spring like bug that beat the Middle East and North Africa, especially considering that many of the revolutions did not usher in the promised change, does not auger well for a country that has experienced the havoc of war before.

Still, with every gunshot, every menacing amoured vehicle and every drove of soldiers poured into random places, this is exactly the kind of fear Museveni wants to instill, according to Besigye. His message as he hits the campaign trail is one of a romantic revolutionary: “They cannot shoot at us forever. They cannot kill us all.”

Besigye agrees that the Arab spring ship has sailed and Uganda did not catch the wind. But, he insists, it is important to “give power back to the citizens.” This, he explains, involves spreading the message of change and the need for defiance to the excesses of a regime that does not understand that it is here to serve citizens and not personal interests.

Besigye recognizes that Museveni’s government will not take a message so emotive lying down, particularly when it is taken to the rural areas where Museveni believes his strongest support base still lies. According to Besigye, it is at this point that Museveni, pushed into a corner, will deploy security forces to stifle dissent in the rural areas. And,

Besigye believes that like all other revolutions, the mutiny of the armed forces is the one hole that can sink the ship of Africa’s still standing dictatorships. Even with examples like Burundi reminding Africa that the world is reluctant to embrace coups no matter their supposed justification, Besigye says an uprising of the people, including the armed forces, is the most viable option in the face of rubberstamp elections. He scoffs at the idea that the west needs to do more to force out Africa’s long standing presidents as “expecting too much”  and dismisses the argument that perhaps the case is usually that there is no credible opposition.

“It would not matter if I promised Ugandans the best governance and policies,” he says and hastens to add that the opposition does indeed have policies on different sectors, some of which the government has adopted without acknowledging them as authors. Still, “There is no room for different policies to contest fairly. First we create this room and then we bring in the policies.”

His message to the droves of people who accost him on the campaign trail with dramatic stunts like donating a couch on which he once rode with precarious excitement on the top of a car; or running out of hospital with a drip to grab a chance to give “the people’s president” money, is consistent- votes do not count but the people’s will and might does.

The only snag is that while the Ugandan opposition envisages a ride into victory at one point in their lifetime, a recent reshuffle of the cabinet and the passing of a law that gives government unfettered access to state coffers is a clear indication that Museveni plans to stay president for a long time. Besigye knows this too, and puts it succinctly thus:

“You can tell from their actions – their impunity – that they do not expect to ever be in the opposition. It is something they do not even imagine.”