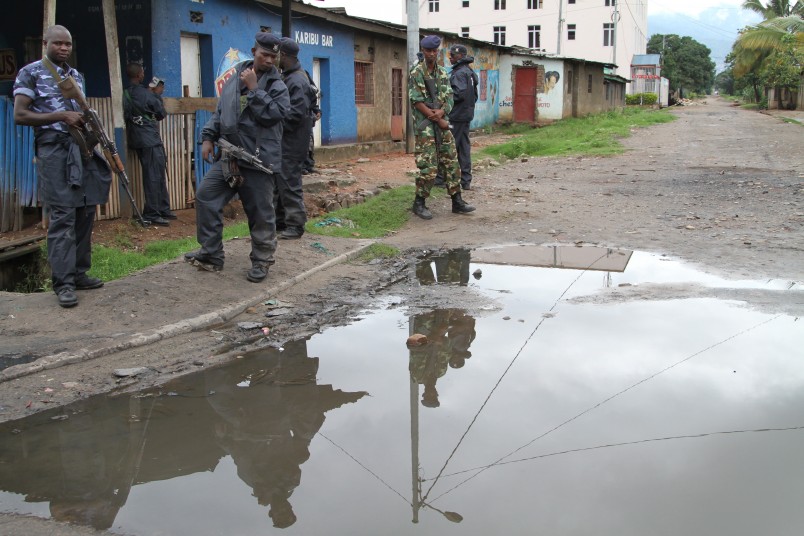 It is not a kind of extreme pessimism or the contested government underestimation, but, the new security system that is not helping Burundi to get over the escalating violence. This is obviously proved by what Bujumbura city and some other provinces are living today after a series of measures undertaken by the government to tackle the rising crisis from the diverging views about the third term of His Excellency Mr. Pierre Nkurunziza.

Ladt Sunday/Monday night, after the ultimatum given by His Excellency Mr. Pierre Nkurunziza, gunshots and grenade explosions have been heard again in many quarters of Bujumbura mayor ship. It all started with grenade explosions and, after, noises of various weapons were heard throughout the night. From 21:00, an explosion was been heard in Bwiza. Thirty minutes later, gunshots and explosions started in Musaga. At midnight, the other remaining quarters were invaded by gunshot noises and explosions. In the morning, people started to report cases of deaths and bodies found along the street in Bwiza. The Bujumbura mayor residence was attacked by an armed group destroying the apartment but, fortunately, nobody was injured or killed. In Bwiza, four people were found dead while in Musaga and Kanyosha, two other persons were found dead. The official number of victims is six with many injured. This totally differs from what we expected when the Minister launched the campaign of forced disarmament.

He said that the new strategy would be successful at a satisfying rate and Burundi would regain security in the near future. He called on people who fled for fear to come back to their quarters but, when they came back, some were unfortunately arrested. This was paradoxical to what the Minister of Security had promised.

The insecurity takes place after one week of launching of forced disarmament campaign initiated by the government.  The campaign started in Mutakura quarter by the Minister of Security and has ensured that the disarmament will be easy and peace would prevail in the capital Bujumbura. This has caused the residents of that quarter to flee to neighboring quarters and some of them have not returned back to their homes. In that very quarter, explosions have been heard again this Monday and people do not understand how that pilot quarter have weapons once more.

According to the police spokesperson, the armed groups have also strategies to hide the weapons. While the police use weapon detecting devices, the insurgents hide them from the area and nobody can identify them. He underlines that the proof of the failure is that on Sunday night, heavy weapons were used and that demonstrates that there are still weapons held by civilians.

This Tuesday morning, many different kinds of weapons were discovered in Nyakabiga, a former contesting quarter, buried underground. They were unveiled by the rain this morning. This can points to the idea that in many other areas, weapons could be hidden like that and it could be easy to find them before they can be used for harm.

When the Minister did not hold a meeting which was scheduled to take place in Musaga, another former protesting quarter, he realized, in my opinion, that what he launched in Mutakura will not sufficiently help. A meeting was to be held together with the population when grenades exploded in the place where a tent was being built. People were injured and the activities stopped. At the same time, in northern quarters, cases of explosions have been reported.

Considering the merits of the new strategy of disarmament, they do not differ more from the merits of the ancient strategy. Rather, people flee for fear of death; others are arrested, others die not necessarily because they possess weapons. The worst is when some police agents profit from the new system by robbing houses. We have seen pictures of police agents who were drinking beer that had been stolen from a shop in Mutakura. Another example is a message on twitter yesterday which reported how people in police uniforms threatened residents. They stole jewelry, cell phones and other valuable personal items. The tweet also reported that the agents put a gun in the mouth of her brother. This is one major drawback of the disarmament strategy

This week started with catastrophic events in Bujumbura. It was a more insecure adventure in this capital after the adoption of a bundle of strategies to preserve peace in many areas of the country. What is needed now is a compromise; if not, Burundi is at the edge of a civil war.

This crisis started in April this year and has been degenerating after the failed coup d’état of May. People are dying every day; others are arrested. The opposition says the situation in Burundi will end in genocide but the government continues to deny it.