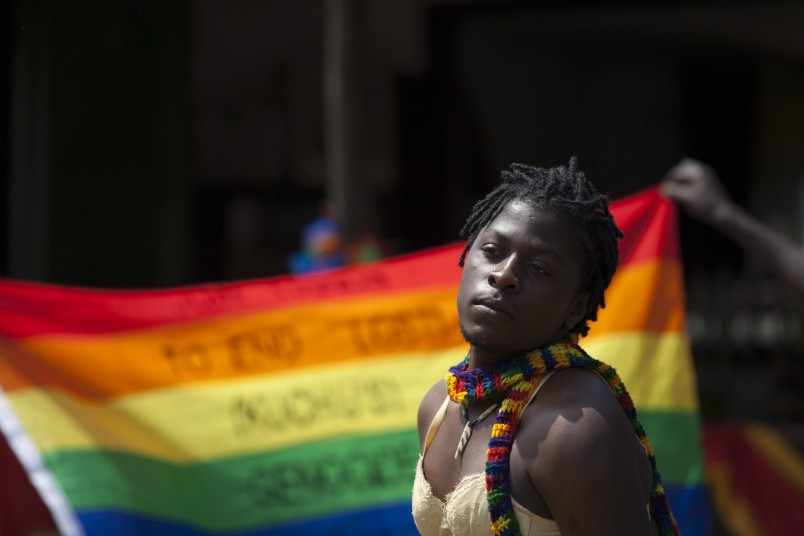 In April 2009, the Parliament of Uganda passed a resolution to strengthen Laws on Homosexuality, this was a private member bill that was submitted by MP Bahati David, in October 2009.  It meant that same sex partnerships in Uganda was illegal, punishable and criminalises homosexual behaviour with prison sentences lasting up to 14 years.The offender may receive the death penalty if the person is HIV positive, that is deemed Aggravated homosexuality or the offender receives life imprisonment that is the offence of Homosexuality.  It has provisions for Ugandans who engage in same-sex relations outside of Uganda, asserting that they may be extradited for punishment back to Uganda, and includes penalties for individuals, companies, media organisations, or non-government organisations that support gays. However, Uganda’s constitutional court overturned the tough new anti-gay laws that had been branded “Kill the gay bill” saying they had been wrongly passed by parliament.The law that was signed by the President of Uganda, Judge Stephen Kavuma, read the verdict at Uganda’s Constitutional Court; said the anti gay bill was illegally passed and unconstitutional, lacked quorum of law makers but homosexuality remains illegal and punishable by jail sentences under previous legislation decision. This was on August 1st 2014.

“Beyonce Karungi is a transgender woman who has had to hold who she truly is inside of her for much of her life. “What one sees of me today is simply the physical manifestation of my true inner feminine self which I have held deep within for over decades of my life. Over the years, I’ve been able to piece together various fragments of my life to form a coherent picture of who I really am inside.”

It’s difficult to imagine what it must feel like to be transgender if you are not. This is one example to try and understand what it’s like to grow up trans”.

“I grew up in a family of girls and I was the only boy, when I reached my teens, I felt like a woman, so I changed the dress code, I really looked like a girl. So people at community chased me out of my father’s home, I went to streets to work as a sex worker a job which paid me much and took care of my family. My clients used to call me in hotels, but when the bill came, the clients went down and even if we went to those big hotels they could stop us by security people in order to protect the image of the hotel”, she disclosed.

“Life became hard I was not able to do my sex work, so I decided to come into activists work to support more people who are like me, I wanted to know their health life like, raise awareness and about our recognition. After realizing a need I founded an organisation as a safer place for Trans gender women to express their challenges, issues that they go through and get technical support. I have been in hiding for the last six months after receiving several threats  am

The criminalisation of LGBT people is a barrier that prevents the communityfrom getting the HIV services and healthcare they need. It will be impossible to end AIDS until all people regardless of their identity or sexuality are able to access to health services and treatment.

Most at Risk Population Initiative

“ We support MSM/Sexual Minorities’ program, Commercial Sex Workers program, Tertiary Institutions Program, Couple program and Community Program among others. As a civil society organisation we supplement government effort and our mission is to promote a coordinated response for HIV prevention among Key Population groups through our objectives,” disclosed Dr. Peter Kyambadde of the National Coordinator of MARPI in Uganda.

“We wanted to scale up the model of Facility and Community and we could not do it alone but Community Health Alliance Uganda came up to give us support with resources to scale up this model of Key Populations in these 3 referral hospitals of Gulu, Mbale and Mbarara, the Ministry of Health produced guidelines which included; Building capacity to reach identified KPs and other vulnerable populations to provide targeted education and HIV Prevention services.

Dr. John Lule who is an Epidemiologist under the Disease Control Program at MARPI and he says that key populations are important in the prevention of HIV because thier higher vulnerability to HIV than the general public. Sex workers have a 35 percent contracting the disease whilsts Truckers 25-32 per cent and Men who have Sex with Men 13.7 percent. This is because they engage in high risk sex, face stigma, discrimination and violence forcing many to live hidden lives and unable to freely access services that could help prevent the spread of HIV/AIDS.

“Government needs to create enabling environment  for Key Populations to access to health services and service providers to deliver friendly services, involving them in planning and delivery of services by building their capacity to deliver services including them in the service delivery team also to location the hidden and mobile Key populations”, Lule added.

Beneficiaries and Service users of the MARPI Services

Sam Oliech 32years is a Peer Educator for MSM/LGBTs in Mbarara Regional Referral Hospital at STI clinic and was born in Kasese District and lives in Mbarara District. “I studied Hotel Management,  became a manager in one of the hotels in Kampala but my colleagues identified was a gay, stopped associating with them, they abused all sorts of words, my boss gave me a termination letter and  joined MSM group which could not talk about me. The people at community neglect us we fear police arrests because they think we are promoting yet we are advocating for our colleagues to come up and access health services” he told me during at interview.

which is based on anti-homosexuality, institutionalises discrimination and violence in society by inciting harassment and brutal actions against LGBT people in the country. It neglects LGBT rights and freedom. If a person is caught or reported as gay, lesbian, bisexual or transgender, the punishment is life imprisonment. A person refusing to report or to give information about someone suspected to be gay, or even trying to defend such a person, can be prosecuted. It aims to intimidate any political, personal solidarity, any liberal thought about sexual orientation this will increase HIV Prevalence due to fear, “he added.

“We have been involved in Dramma; it helps us sensitize the public and driving a point to the community who later join us for HIV testing. Dramma has helped a lot because it throws the messages directly to the community were we stage and also tend to know who we really are as KPs. We have changed lives; we never had jobs, CHAU came  involved us in various activities which has made us busy and they have been paying us monthly, he continued.

Richard Lusimbo 28 years born in Mbale district and lives in Kampala and works with Sexual Minorities Uganda as the mobiliser, “My family knows am Gay, I never had a chance to tell them but they read in the news papers and accepted my decision, i associate with them. From University i joined SMUG (Sexual Minorities Uganda), i never wanted to be discriminated from work that’s why I decided to join LGBT family, accessing health services is hard, we are scared that the doctors might report us and we are arrested but the annulment of the law gives gay rights advocates in Uganda legal leverage to fight a reported surge in discrimination including evictions, jobs lost and denial of medical treatment since it was passed.  There is space for people who are victims of social pressure, victims of violence to feel that they can take their complaints somewhere and hopefully obtain some access to justice,” he revealed.

‘We were living like slaves, bitter slogans to us, we are beaten, denied jobs before the court ruling, though not so free, we have to go through the police if we have an activity, the main stream of where we access health services is very difficult, Ministry of Health together with MARPI helped us a lot of providing guidelines to protect our health need and access of health services in hospitals. Sexual Minorities Uganda runs adverts on Radio not for Key Population to shy away but access health services, Ministry of Health through MARPI are helping us with the issue of Discrimination in Hospitals, DANIDA has left a big gap in Uganda, in memories of Key Populations (as they call us), our colleagues in those districts have been releaved with expensences of Medicine, we are going to buy again expensive STI tabs’, he adds.

This brutality of LGBTs has been ongoing for many years, and reached a climax in 2014, after the new Anti-Homosexuality bill was passed.  Parliamentarians have been working towards returning the “Kill the Gays Bill” however this has not been possible due to Uganda’s AIDS Commission which says HIV prevalence is higher in this group of people; instead of chasing them away from treatment we should be giving it toto ensure that the HIVprevalence reduces.

Sarah Nakimbowa lives in Uganda and is a member of Key Correspondents, a citizen journalism network reporting for action on HIV. The network is supported by the International HIV/AIDS Alliance.

Sarah holds a degree in mass communication, and have attained different certificates in HIV/AIDS guidance and counseling. She communicates to different groups of people to make positive change. HIV/AIDS is a key aspect in my field of work - Including maternal health issues, Key Populations (Most At Risk Populations), Sexual Reproductive Health Integration & HIV, Towards an AIDS Free Generation in Uganda among Children. Human rights & Gender issues and Communication Skills and Advocacy.