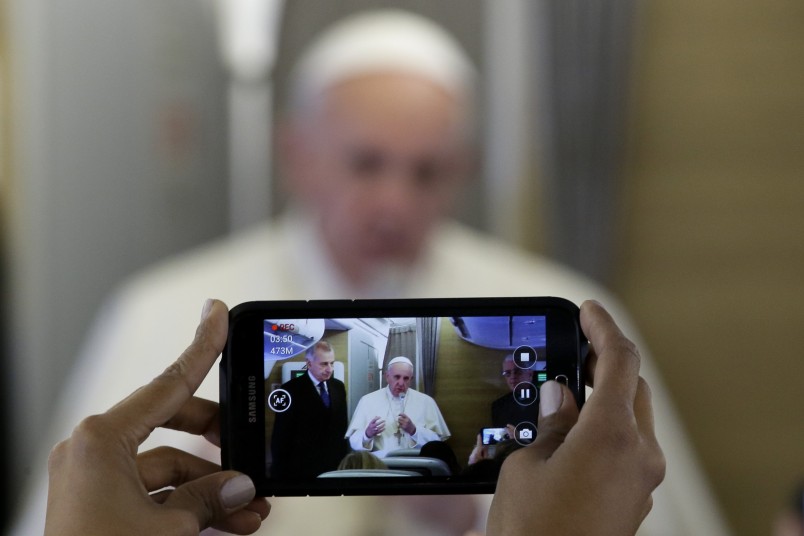 Pope Francis visit to Uganda, a trip steeped in history, at the end of this week, threatens to bring much needed relief to a country in the throes of its most competitive presidential campaign in decades.

Pope Francis will be the third Pope to visit Uganda when he touches ground on Friday. His predecessors Pope Paul VI and Pope Paul II visited in 1964 and 1993 respectively.

President Yoweri Museveni, running for his fifth term in office, is running against perennial contender Dr Kizza Besigye and erstwhile right-hand man Amama Mbabazi, in a race which may go to a second round.

Under Ugandan law to be declared president a candidate must win 50 percent+1 vote. A failure to do this forces a second round in which the two candidates who polled the most votes face off to determine the winner.

In the four previous polls Museveni has beaten his opponents handily, polling more votes than all his rivals combined.

Besigye, 56, has mounted three credible campaigns against Museveni, 71, but the entry of Mbabazi, 66, has observers thinking a run off is eminent. There are five other candidates in the race including a woman but they are only making up the numbers.

The candidates have been canvassing the country over the last two weeks ratcheting up the political tension with every rally. The polling day is on February 18.

The successor of St Peter will wade into this charged atmosphere on his visit to this county where four in every ten Ugandans is a Catholic. Protestants make up another 40 percent with Muslims and other traditional religions filling up the rest.

He is not expected to make any political pronouncements but the centrepiece of his trip will a visit to the shrine of the Uganda Martyrs, a group of mostly Christian page boys in the royal court who were burnt to death for disobeying the King of Buganda, Kabaka Mwanga by refusing to renounce their faith.

Uganda’s colonial history is coloured by religious wars between the Catholics, Protestants and Muslims who jostled for influence with the Kings of Buganda, which was the most dominant kingdom among several others in the region. This legacy lasted beyond independence, with these same divisions forming the basis of political activity more than tribalism as was the case in the country’s eastern neighbour, Kenya.

Twenty-two of the 45 martyrs were Catholic and were beatified in 1920 by Pope Benedict XV and canonised by Pope Paul VI during his visit to Uganda, two years after Uganda got independence from Britain in 1962.

Superstition has it that Uganda’s turbulent past which includes the bloody rein of Idi Amin and decades of civil war which culminated with the fleeing of rebel leader Joseph Kony and remnants of his Lord’s Resistance Army to the Central African Republic, were are a curse on the nation for butchering the Uganda Martyrs.

Religious animosities and all forms of sectarianism have been actively suppressed since Museveni took power in 1986. Preparations for the visit are being coordinated between the Catholic and Protestant churches, which previously supported rival political parties.

The political parties the Democratic Party, which was Catholic backed and the Uganda People’s Congress, sponsored by the Protestants, have found themselves increasingly marginalised in the last 30 years.

Observers believe they have breathed their last breath with their inability to, for the first time, field a presidential candidate for next year’s elections.

Away from the politics the nation is hobbling under the weight of a plummeting shilling, which has led to a downgrade of economic growth prospects and raised the spectre of runaway inflation.

The shilling has shed more than 40 percent of its value against hard currencies on the back of a strengthening dollar and falling commodity prices. Inflation came in at 8.2 percent on October, the highest it has been since 2012.

Pope Francis will find a country at a crossroads, politically and economically, where it is hoped that his refreshing message of compassion will soothe the harassed and reenergise the battered spirits of its people.