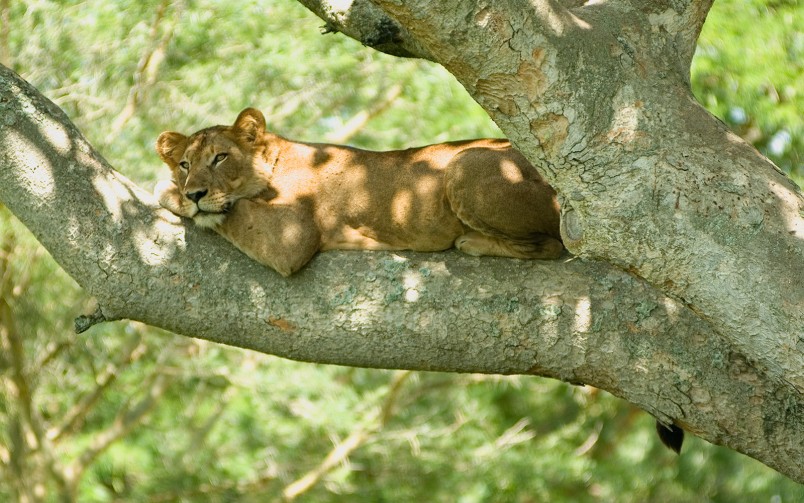 Former Dutch and Barcelona FC striker Patrick Kluivert’s spectacular goal in a weekend exhibition match in Uganda’s capital, Kampala over the weekend, may be the shot that launches a thousand ships towards Uganda’s shores, tourism promoters’ hope.

The goal, whose video has been viewed by more than 85,000 people after two days, sees Kluivert taking a cross from Luis Garcia and with a first time chip, off the outside of his right boot, audaciously lobs the Ugandan custodian from 40 meters out.

The match, between the former players of the Uganda national team and Barcelona FC was played at the Nelson Mandela Stadium just outside Kampala, as part of a campaign by a rejuvenated Uganda Tourism Board (UTB) to boost visitor numbers.

Uganda, once touted as “The Pearl of Africa” by former UK premier Sir Winston Churchill, who was dazzled by its green valleys, vast lakes and mountain ranges, is experiencing a resurgence in its tourism industry following years of civil unrest and neglect.

Before independence in 1962 and for at least a decade after, Uganda was part of an East African safari circuit with Kenya and Tanzania, which promised big game – lions, elephants, buffalo, rhino and leopard, scenic views and year around sunny weather.

However, the ascendance to power in 1971 by Idi Amin and the subsequent spiral into lawlessness, knocked the country off the list of prime tourist destinations, led to a massive depletion of its animal numbers and destruction of its pristine environments.

In 1986 President Yoweri Museveni came to power at the head of a rebel army, restoring peace to the country, but doing little much else towards the promotion of tourism.

This all changed in 2013 with the release of a World Bank sponsored study that showed that tourism racked in $1 billion the previous year with little input from the government. At the time the tourism promotion budget was about half million dollars and the World Bank advised that if an additional 100,000 visitors came to Uganda they would increase earnings by 11 percent and GDP by 1.6 percentage points.

With this realisation the government reconstituted the UTB, has ramped up its budget tenfold in shilling terms to sh11.4b ($3.25m) from the 2012 and has become more engaged in promoting the country as a holiday destination.

Officials are encouraged by the result of recent campaigns and think next year the tourist numbers should jump after the Barcelona match and the visit in November of Pope Francis to commemorate the 50th anniversary of the Uganda martyrs’ canonisation.

The Uganda martyrs, a group of 45 Christian page boys in the palace of the King of Buganda were killed for defying the King between 1885 and 1887. The 22 Catholic martyrs were canonised in 1964 and are celebrated on June 3, the culmination of the largest Christian pilgrimage on the continent.

New UTB boss Stephen Asiimwe says they are just getting started. He argues that Uganda has an abundance of tourist attractions that once properly marketed, the sector will earn the economy tens of billions of dollars over the next few years.

Last year hard currency revenues from the export of goods and services came in at about $5 billion.

Asiimwe says the Uganda martyrs shrine on the outskirts of Kampala, where the martyrs were eventually butchered and burnt on wood pyres, counted about four million visitors this year. Positioning the country as a religious tourism destination can double even triple these numbers.

Ticking off the embarrassing riches of natural attractions, Asiimwe lists the abundance of bird, butterfly and primate specii, the highest concentration of hippo and crocodile in one location at the Murchison Falls Park in northern Uganda, the country is home to more than half the world’s population of mountain gorilla and has three of the top five highest peaks on the continent on the Rwenzori Mountains.

This is all in the context of a tropical climate tempered by the numerous water bodies – 20 percent of Uganda’s land area is occupied by water bodies, a sumptuous variety of foods and a Kampala night life, which is fast becoming an attraction of its own.

Slap-bang in the middle of Africa, Uganda is also in the center of a volatile region.

While Uganda is peaceful, travel advisories issued by foreign governments against their nationals visiting the region often makes it seem like rolling a huge boulder uphill only to be knocked back down the hill.

Last year’s Ebola outbreak in west Africa dented Uganda’s marketing initiatives well into the first six months of these year, never mind that the outbreak was contained by late last year. Last Month Sierra Leone which was at the epicentre of an outbreak that claimed about 10,000 people, announced that the last victim had been treated.

“The distance from Siera Leone to Uganda is as far as from Vancouver (Canada) to Cuba,” Asiimwe complains.

In response, UTB is hiring PR firms in western capitals to lobby against the issuing of gratuitous travel advisories and this year flew 75 top travel journalists and took them around the sites, all in an effort to “bridge the information gap”. These journalist jaunts will become an annual event.

Beyond that, the country needs to spread out the hospitality infrastructure away from the capital, where up to 70 percent of the country’s 4,000 hotel beds can be found, as well as professionalise existing establishments to the level of their much more seasoned Kenyan counter parts.

But there is always space for quality. The possibility of the hotel chains Hilton and Hyatt soon joining the Sheraton Kampala as the premier hotels in the country gladdens Asiimwe’s heart.  The regional based Serena and Protea Hotels also have a presence.

Already tourists need one visa to visit Kenya, Uganda and Rwanda three of the five members of the East African Community, an initiative that can benefit all of them.

We are not competing with Kenya or Rwanda, Asiimwe argues, we have unique attractions which can only be supplemented or supplement the other countries, in fact why are we marketing ourselves as individual countries when we would have more pull as a region?