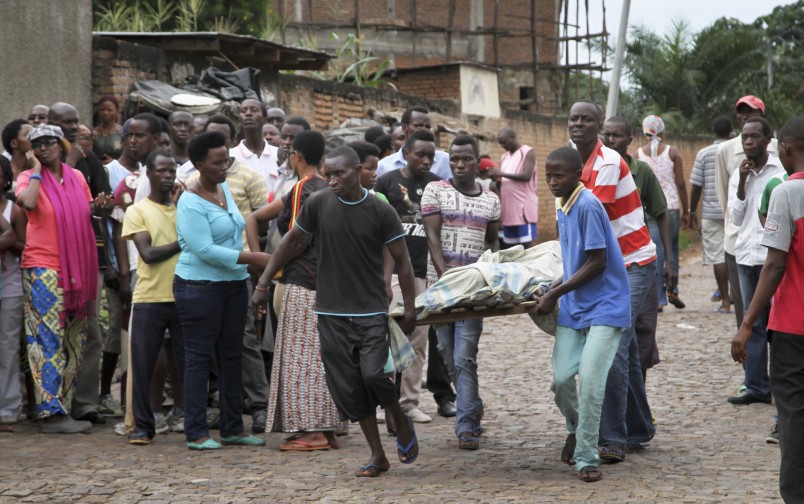 “Burundi is at bursting point, on the very cusp of a civil war,” said he UN High Commissioner for Human Rights (OHCHR), Zeid Ra’ad Al Hussein.

Fears are mounting as actions taken by the Burundi government resonate with those who recall the 12-year civil war in the country. However, these fears until now seem somewhat to have been disregarded. Whilst measures are being taken to prevent another civil war which could snowball into genocide more is needed and the African and international community are responding.

Last week 87 people were murdered in the capital, Bujumbura and according to residents of the area the victims were bound and shot, reported The Guardian.

“The carnage of last week confirmed the extent to which violence and intimidation are catapulting the country back to the past – to Burundi’s deeply troubled, dark and horrendously violent past … and has only served to move the much-needed political solution further from reach,” Zaid said yesterday during his speech to the Human Rights Council Special Session on Burundi.

The number of deaths caused by the violence since President Pierre Nkurunziza announced his bid for what was deemed an unconstitutional third term in April and then was re-elected in July after contested elections, is now at least 400 people according to the OHCHR and since then around 3,496 individuals have been arrested.  Neighbouring countries are currently hosting 220,000 refugees and countless others are internally displaced.

Zaid called for “very close monitoring of the borders with neighbouring countries” in order to prevent the flow of arms into Burundi. He suggested the use of drones as a “method of conducting such monitoring.”

It was the United States who requested the Human Rights Council session on Thursday suggesting that the OHCHR office send a team into Burundi to examine the situation on the ground. The Council which is made up of 47 members, 13 of which are African countries, along with the five permanent members of the Security Council unanimously supported the resolution to send in an independent team of experts in order to investigate abuses. They will be due to report back to the Council in March recounted the New York Times.

Adama Dieng, the UN special advisor on the prevention of genocide said “no one should underestimate what is at stake. A civil war between 1993 and 2005 cost over 300,000 lives and displaced more than one million people.”

The African Union (AU) during a discussion on Burundi said Africa will “not allow another genocide to take place on its soil”. The government of the small country is asserting that there is no current threat of genocide, reported the BBC.

Smail Chergui, the AU Peace and Security Commissioner, tweeted that “the killings in Burundi must stop immediately”.

On December 13 the fact finding mission for Burundi conducted by the Peace and Security Council of the AU, a Delegation of the African Commission on Human and Peoples’ Rights (the Commission) returned after a week-long investigation (December 7-13).

Preliminary findings have indicated that the current situation is of grave concern and those conducting the mission reported that they received information from pertinent stakeholders of ongoing human rights violations along with other abuses.

Thus far the Delegation has made five recommendations to end the “escalation of violence and remove conditions leading to human rights violations and abuses”: “emphasizing that the current crisis cannot be solved through the use of violence”; calling on the Burundian government to investigate all human rights abuses; enabling all humanitarian actors free access to the country; “Underscoring the importance of the presence of neutral monitors”; and finally inviting “the people of Burundi to urgently and immediately commence a process that will end the crisis and bring lasting peace”.

The BBC reported that thus far the conflict in Burundi has not revealed cracks along ethnic lines even though many among the international community have warned of genocide. Each side has accused the other of using ethnic divides to fuel the violence however neither have used such tactics so far. International observers are fearful that such rhetoric will escalate violence along ethnic lines.