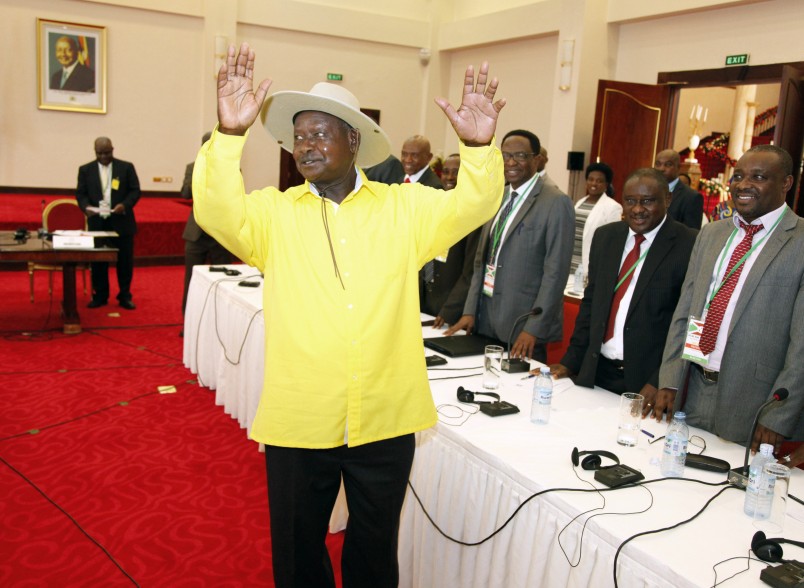 A meeting in Uganda at the end of 2015 to resolve the conflict in Burundi did little to bring hope to the violence ravaged East African nation, serving only to highlight the crisis as the region’s most pressing security issue in the coming year.

Last week on December 28 Uganda’s President Yoweri Museveni opened the latest round of  Burundi peace talks to stop months of fighting triggered in April by president Pierre Nkurunziza’s plans to seek a third term in office.

His critics argued that a third term would go against the two term constitutional limit, while his supporters claimed that a constitutional court ruling had cleared the way for him to run. Nkurunziza then won a disputed poll in July, which aggravated the situation.

At the beginning of December armed men attacked three military installations sparking a spree of killings which raised the spectre of another genocide in the region.

In 1994 about 800,000 ethnic Tutsi and moderate Hutus were killed across the border in Rwanda following the death of Juvenal Habyarimana in a plane crash in the same year.

Observers estimate that at least 400 people have been killed in the violence and about 220,000 have fled the country as refugees.

However the talks, held in Entebbe on the shores of Lake Victoria, got off to a rocky start when the government delegation said they would walk out if any of the perpetrators of the May coup attempt were in attendance.

Analysts have also pointed out that the constitution of a government for national unity as a means to resolve the crisis is misguided as that is already a constitutional requirement. The Burundi constitution states that any government should be formed by the two dominant tribes – Hutu and Tutsi in a 60:40 ratio, represented by recognised political parties.

The talks are further complicated by armed groups that are not represented in the talks but are behind the May coup attempt and the current threat to send Burundi down the road to civil war.

The talks, which broke off before the New Year and are set to resume on Wednesday January 6, in the Tanzanian town of Arusha, were thrown in doubt after unidentified assailants fired three shells into the center of the Burundi capital, Bujumbura injuring three people on Monday, just days before the resumption.

Observers say the Burundi troubles do not augur well for a region struggling to forge a unified market to attract much needed investment.

The East African Community (EAC), which Brings together Kenya, Tanzania, Uganda, Rwanda and Burundi, is a $110b economy with a population of about 130 million people. The region’s leaders have identified several key infrastructure projects that will strengthen the links between the five economies and make it more attractive for investment.

The investments in roads, railways, ports, transmission lines, oil and gas infrastructure will require $100b over the next decade.

Already in question is a 2,561 km $7.6b standard gauge railway line from the Tanzanian port capital, Dar es Salaam to Rwanda and Burundi, aimed at opening up the two landlocked countries and the eastern Democratic Republic of Congo beyond them.

Another key infrastructure project that could come under threat is a 220Kv electricity transmission line between Rwanda and Burundi, part of a $390-million project to interconnect the power grids of Kenya, Uganda, Rwanda, Burundi and the Democratic Republic of Congo.

The crisis in Burundi is also putting a damper on the creation of the five-member state customs union, which allows for the free movement of goods and services through the region and moves towards a monetary union, which has already been ratified by all member states and is expected to come into operation by 2025.

Given the high stakes, some within the region are considering suspending Burundi’s membership if they jeopardise these and other key infrastructure projects, which the region has negotiated for jointly.

Under the treat establishing the EAC three articles provide for the voluntary withdrawal, suspension or expulsion of member states.

However the key architects of the EAC, which is a throwback to an earlier merger of the Kenya, Uganda and Tanzania that collapsed in 1976, would be loath to dismantle the current arrangement.

In fact there are moves to enlarge the EAC to include South Sudan, which process has been stalled by the explosion in violence there that started in 2013, Somalia and Ethiopia.

Museveni called for a political solution to the problem but commentators have recommended solutions as drastic as that the opposing parties in Burundi fight themselves to a standstill  or until there is a clear victor one way or the other. Or that an intervention force be cobbled together, move in, disarm everyone and stabilise the situation.

Geopolitical considerations mean a consensus will not be easy to come by.

Neighbouring Rwanda where the consequence of the explosion in ethnic violence two decades ago are still being felt, is watching developments across the border warily. The same ethnic dynamic is at play in both countries and a spill over into Rwanda cannot be dismissed.

Uganda, distracted by the most competitive presidential election campaign in 20 years, is loath to overreach its mediation mandate, Tanzania’s new president John Magufuli is still acquainting himself with his new role, while the Kenyan government which has been under siege for its lukewarm response to corruption, is grappling with serious fiscal difficulties a result of a Eurobond it took out two years ago whose repayment has been made difficult by a near 25 percent collapse of the Kenyan shilling against the US dollar.

All the EAC countries have suffered a fall in hard currency receipts as commodity exporters, which has dampened growth prospects, compromising their ability to fight urban and youth unemployment, potential avenues for future unrest.

It is critical that the Burundi situation is resolved but it seems like the region is failing to muster the will to pacify the situation. This may see the region missing out on billions of dollars in investment necessary to fend off potential social instability.