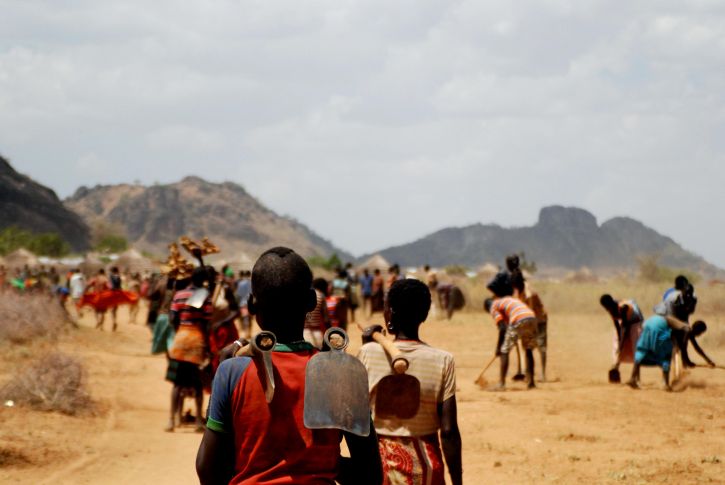 A new poll, half way through the Uganda presidential campaign has provided cause for pause as the anticipated challenge to President Yoweri Museveni’s 30 year old stranglehold on power, seems to be running out of steam.

Uganda’s leading daily, The New Vision newspaper, on Tuesday published a poll that showed 71 percent of the respondents would vote for Museveni, 19 percent for his main rival Dr Kizza Besigye and six percent for former Prime Minister Amama Mbabazi.

The New Vision survey polled 6,000 people in December from 34 of the country’s 112 districts.

The government has a 53 percent controlling interest in the New Vision and the remainder is owned by institutions and individuals.

It reiterates the results of other polls carried out since the beginning of last year, which show that Museveni has a commanding lead over his challengers.

Observers had, at the beginning of the campaigns in November, predicted a three-horse race with the entry of Museveni’s erstwhile ally Mbabazi into the race, which would have forced a run off after the February 18th poll.

According to the constitution the leading presidential candidate needs to win by 50 percent plus-one vote in order to win the race. A failure to do so will force a run off between the two leading candidates.

In the last four elections Museveni has won handily winning more votes than all the other candidates combined.

Initially the opposition tried to cobble an alliance between Besigye and Mbabazi, which was scuttled by neither candidate’s willingness to step down for the other.

Besigye, a former political commissar of the ruling NRM party, broke ranks in 2001 to challenge Museveni and has been doing so in the subsequent two elections. In 2006 when he was arrested charged with treason and rape and kept in jail for a large part of the campaign period.

Mbabazi, who in 2001 chided Besigye for jumping the succession queue and was then sacked as prime minster in September 2013. Initially he tried to wrestle the mantel of NRM flag bearer from Museveni but was out manoeuvred and announced in July that he would be running for the presidency as an independent.

He maintains that he is still a member of the ruling party which he helped form with Museveni in 1980 and served as a secretary general until last year’s fallout.

The opposition believed that Museveni’s longevity, the teetering economy and the youth and urban unemployment would be enough to tip them over the bar. Opposition planners laso hoped that with two strong candidates they could get the five million voters who stayed away in the last polls to vote confident the majority are opposed to Museveni. They argue that the crowds Museveni continues to command is courtesy of state resources and are not a true reflection on the ground.

The economy has struggled in the last five years buffeted by a strengthening dollar, falling commodity prices and a loss of South Sudan as a market after it erupted into ethnic violence at the end of 2013.

Museveni is running on his record of restoring peace and security to the country, salvaging the economy from the mismanagement of the 1970s and 80s and his promise to lead the small east African nation in to middle income country status in the next decade.

Last week Museveni sidestepped the first televised presidential candidate debate. None of his main rivals – Besigye and Mbabazi, distinguished themselves in the debate and the jury is still out on whether Museveni’s absence will hurt him in the polls.

The Museveni campaign stated he was giving the debate a miss because he had a full campaign schedule he couldn’t disrupt.

Observers looking at the recent poll noted that Museveni’s rural base seems intact and also pointed out that he is going from strength to strength in northern Uganda where he was previously unpopular. Northern Uganda suffered the brunt of a two decade long insurgency since Museveni’s rise to power in 1986, which brought the area’s economy to a standstill and displaced more than two million people.

The Lord’s Resistance Army (LRA) have been absent since 2004 when they were beaten back into South Sudan, the Democratic Republic of Congo and now the Central African Republic where it is said rebel leader Joseph Kony is holed up with a few dozen fighters.