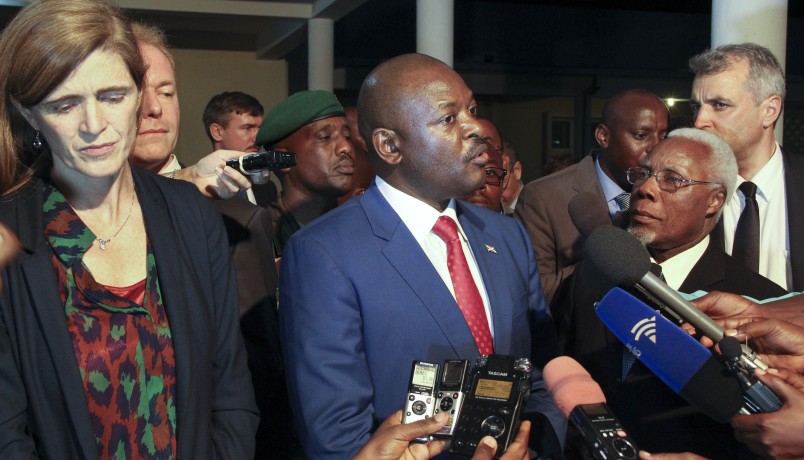 The United States State Department said it is “deeply alarmed” regarding the situation in Burundi and has advocated for African leaders to “work behind the scenes” to convince Burundi to receive the deployment of international troops.

Ambassadors to the United Nations Security Council addressed the African Union (AU) in Addis Ababa, Ethiopia, on Saturday urging them to work out the next move to end the violence in the country. The meeting came after the Council met with Burundi’s president, Pierre Nkurunziza during the week in the capital of the country, Bujumbura.

The Egyptian Ambassador, Amr Aboulatta, talking about Nkurunziza’s refusal to accept AU peacekeepers, “he’s in total denial about the dangers” the country faces. Recommending an incremental approach to the situation Aboulatta said, “you begin step by step: begin by observers, and then police force and then full force,” reported Voice of America.

Samantha Power, U.S. ambassador to the United Nations, spoke with reporters after the meeting with the AU and said, “the African Union has to work through what its next move is, now that the force it authorized is rejected.”

After her time in Burundi Power stated “none of us want the situation in Burundi to deteriorate, we’re here because we want to support efforts at dialogue, because we believe as a council that a more substantial international presence here can help, we conveyed those points to the president.”

Power said, unfortunately that they had not achieved as much as they had hope to during the meeting but she said they would “never give up, the cause of peace in Burundi is too important to give up.”

The African Union (AU) announced last month it’s plan to send 5,000 peacekeeping troops to the country, yet, this has done little to curb the violence. Burundi’s government rejected the offer saying they “did not need them”. Tanzania was the first East African country to openly support the proposal.

One of the major fears is that the situation in Burundi will not only escalate into a full blown civil war but will end in genocide. During the meeting with the Security Council in Bujumbura, Nkurunziza said he was there “to guarantee that there will not ever be another genocide in Burundi.”