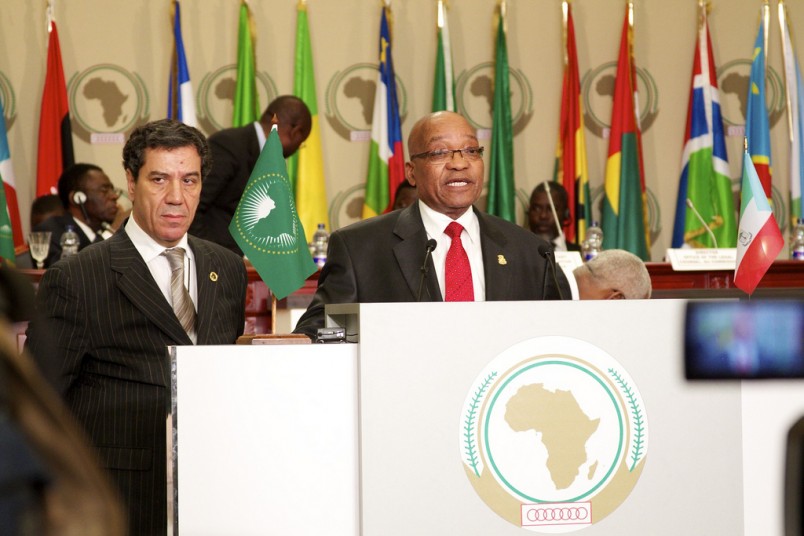 The African Union (AU) is convening its January 2016 under the guiding theme: ‘African year of human rights with a particular focus on the rights of Women’.  As is customary, the AU Heads of States Assembly will assemble last on 30-31st January, after having been preceded by meetings of the Executive Council and the Permanent Representatives Committee. Notwithstanding the themes, which in part focus on the deliberations at the Summit, the headlines and the pressing issues facing the continent will always steal the thunder out of these lofty ideas. This current summit will be no different. Without a doubt, declarations will be abound with regard to what AU member states have done to protect the rights of citizens, including women as a vulnerable category. However, the AU agenda for the year 2016 is already stained by events, which for the most part currently demand a reactive response as opposed to the proactive which are what have been outlined in the summit themes.

These three questions call for pressing answers from the AU; first, what are these burning events that could potentially disrupt what ordinarily ought to be a virtuous cycle of planning in the life of the African Union Commission (AUC) and broadly speaking the African Union? Second, are these summit themes aligned to the most pressing issues facing the continent? Third, how best can the summit reflect the current political and socio-economic realities in Africa? These questions open opportunities for adaptation and reform by the AU.

Part of the response to these complex questions, which is not the explicit objective of this piece can be found in what the African Union actually is – a form of lowest common denominator intergovernmentalism. Oddly in its current form, its ideals and ambitions demand an advanced form of suprationalism. The AU summit themes, including the state-centric form of the deliberations promote national breast-beating by affirming positively the actions of member states without a sound evaluation of zones of failure and progress around these. This approach has made summit themes routine in the business of the AU, with the core burning issues tangential. This explains why pressing events and issues, which ought to be the core of deliberation and problem-solving at the summits, are less likely to enjoy the attention they deserve. In light of the current climate, this summit could as a consequence be a lost opportunity in a year of high risks.

What are the markers of the ‘lost opportunity’? Just over two years ago, on the eve of the 50th anniversary of African unity, the AUC Chairperson, Nkosazana Dlamini-Zuma had written as Nkosazana an imagined e-mail from the future to Kwame from the Confederation of African States. Her idealistic e-mail underpinned her most significant achievement at the AUC, an ambitious document titled, ‘Agenda 2063: The Africa we want’. With seven core aspirations, covering a wide spectrum of opportunities, the AUC has its work cut out for it when giving practical expression to the notion of a desirable Africa. AU summits are crucial platforms for deliberations and problem-solving around the burning questions that could hold back the Agenda 2063.

As the AU summit 2016 passes in history, the prospects for ordinary Africans have never been so bleak with the ‘Africa rising narrative’ in a state of flux. The commodity price super –cycle which propelled Africa’s economic growth is running out of steam. The World Bank Africa Pulse Report of October 2105 worryingly notes a significant deceleration in economic growth, with significant declines from 4.7 in 2014 to 3.7% in 2015. The report further highlights fiscal deficits and inadequate policy buffers as significant challenges facing Sub-Saharan Africa. These economic headwinds could be compounded by significant political and security risks. Violent religious extremism is decimating the economies of Mali, Burkina Faso and Kenya. For its part, Boko-Haram has caused untold paralysis in the regional and local economies of no less than seven African states in West and Central Africa. Old conflicts, a result of botched governance and state-building processes are rearing their ugly heads in Burundi and South Sudan. Elections as the case of the Central African Republic illustrates are no longer a hallmark of opportunity, but an impasse that could plunge the country into chaos. In some instances, elections and referendums, instead of opening up the future, they return the old. In this age of lesser opportunities, young Africans who ought to incarnate the ‘Africa we want’ are voting with their feet by undertaking the dangerous trek through the Sahel and the deadly waters of the Mediterranean in their quest to reach the shores of Europe. Nothing suggests that the AU summit will deal decisively with this bouquet of challenges. After all, a number of these have been with us without receiving the extra-ordinary summit that is called when a head of state is arraigned in front of the International Criminal Court. Consider this, the AU acts as if African countries don’t export migrants who risk their lives to reach another continent. It acts as if xenophobia within its borders is a conspiracy. Moreover, the AU will approach this summit as if there is the not so small matter of a vacancy for the head of the AUC in 2016.

The Summit deserves the fact that the emphasis that this lackluster approach to the ordinary African is inconsistent with the very spirit of Agenda 2063 which pledged to mobilize the African people as owners of their programs of action. If the AU 2016 summit declarations cannot tangibly reflect depth and width around these challenges, both in terms of robust discussion, institutional re-gearing and solutions, for Kwame the e-mail from the future from Nkosazana would remain just that, imaginary. What’s more, in the absence of institutional reforms to reflect that urgency, the opportunity in Agenda 2063 risks becoming a mirage.

Dr Tjiurimo Hengari is a senior fellow in the foreign policy programme at the South African Institute of International Affairs.