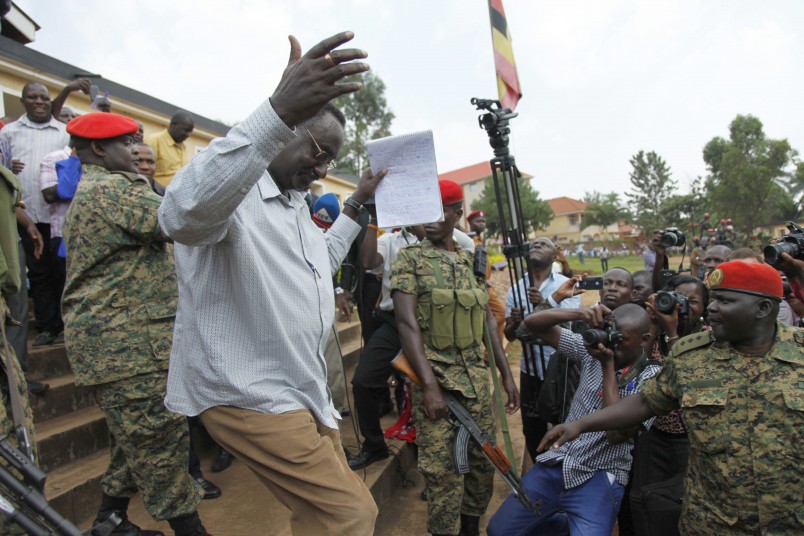 The weekend arrest of General David Sejusa and his appearance before the court martial on Tuesday has raised concerns ahead of the 18th February poll, which it is believed will be the most hotly contested in more than three decades.

Sejusa who is still on the army roll, was charged with ten counts of being absent without leave, participating in political activities, insubordination and indiscipline.

The General, a veteran of the guerrilla war that brought President Yoweri Museveni to power in 1986, maintains he is no longer an army officer since he applied for retirement in April last year and has not received a salary and other allowances that would ordinarily be due to him since.

Sejusa’s run-ins with the state are not new. In the mid-1990s he unsuccessfully went to court to have his resignation from the army upheld. In 2013 he went into voluntary exile claiming there was a plot to have him and several leaders assassinated for opposing plans to install the President’s son as his heir to the presidency.

Since the beginning of the campaigns in November Sejusa has been fraternising with Museveni’s main challenger Dr Kizza Besigye and attending his rallies.

Observers believe that a media interview he General gave last week in which he claimed that Museveni cannot be beaten using the ballot but needs to be uprooted by popular uprising may have been the last straw, forcing the army to move on him.

The presidential campaigns, which have entered their final leg, have been heated and perception of a three-way race, uncharacteristic for the small east African nation has persisted.

All polls commissioned in the last 12 months continue to put Museveni ahead of perennial challenger Besigye, former Prime minister and right hand man Amama Mbabazi, who broke ranks with the ruling NRM party when he attempted to wrestle the leadership away from Museveni last year.

However the campaigns have been held under a cloud with the candidates fanning the possibility of an eruption of violence before or after the polls.

The opposition say the people will not allow the government to rig the elections and the government agents on the other hand warning that any attempts to disrupt proceedings will be met with force.

A survey by the Human Rights Network (HURINET) whose results were released earlier this week warned of a growing expectation of violence based on the recruitment of militias by the opposition to “guard” their vote and the “partisan” nature of the police.

Sejusa is not a figure that elicits much sympathy, as an army and intelligence officer, he was not averse to using heavy handed methods against those opposed to the government and some think he is getting his just rewards.

However his arrest is being used to galvanise opposition supporters.

Besigye, who was his roommate at university and best man at his wedding, but who was brutalised at the General’s orders for his participation in the 2011 “walk to work” protests, said he was not surprised at the General’s fate as the government is always looking to gag speakers of the truth.

Last week the Electoral Commission flew in ballot papers that were printed in South Africa and Dubai and a new biometric system aimed at curtailing electoral fraud.

The polling body’s boss Badru Kigundu warned that any attempts to disrupt the exercise wold be countered with ferocious force and that he would not be averse to calling in the army to help the police.

This will be Museveni’s fifth bid for the presidency. In previous polls he has beaten all his handily, garnering more votes than all his rivals combined.

However a poll released last month by local based research outfit Research World International (RWI) indicated that Museveni be forced to face a run-off this time around.

According to the Uganda constitution if the winning candidate does not win 50 percent-plus-one-vote and runoff will be called between the two leading contenders.

Many observers think that forcing Museveni into a run off would remove the air of invincibility he has built around him over the last five presidential elections and allow the opposition to come together to beat him.

The latest RWI put Museveni’s approval rating at 51 percent shortly after a survey by the country’s leading daily reported that respondents had given the president 71 percent. Polls over the last 12 months have given Museveni between 51 percent and 71 percent.

Last month Uganda commemorated 30 years since Museveni came to power. In those three decades his administration has lifted Uganda from the economic basket case it was to one of the most vibrant economies on the continent.

However his critics point to rising, income inequality, youth and urban unemployment as signs that the economic liberalisation policies of the Museveni era are failing.