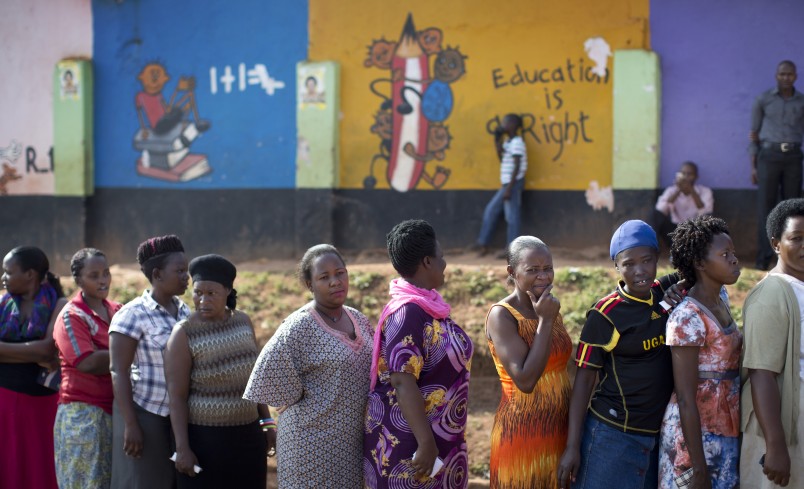 Ugandans went to the polls Thursday with reports of delays in the delivery of voting materials in many polling stations of the capital Kampala. Despite these glaring hitches, the just ended campaign season has been marked with a low level of violence and campaign mayhem in comparison to the four previous since President Museveni came to power. Mass violence is an aspect of campaigns that had come to be expected as a given in Uganda.

Though the last days of campaigning in Kampala registered a violent confrontation between the police and the supporters of Museveni’s leading challenger Dr. Kizza Besigye,  where one person was shot dead, it should be noted that this has comparatively, been a peaceful  electoral exercise, though the stakes are higher than ever before.

At the beginning of the campaigns, private bodyguards of the former prime minister Amama Mbabazi, one of the challengers to Museveni, put up a fight against supporters of the incumbent in the south western town of Ntungamo, raising concern of a possible escalation and a violent election process. However, the former Prime Minister’s campaign team was gradually downgraded as many of the people involved in his effort, left and went back to the ruling party- the National Resistance Movement (NRM) and he was eclipsed by the popularity of Museveni’s longtime challenger Besigye as the main opposition contender.

The realisation by the incumbent’s camp that his former Prime Minister was a peripheral candidate, probably informed the restraint. Even for Besigye, he has not been subjected to the kind of violence he has been visited upon in the past elections.  Also, the realisation that a campaign of violence and humiliation that has been visited on Dr. Besigye in the past, has not helped to dampen his popularity, could have informed the restrained manner in which regime functionaries have engaged him in this campaign period.

In the 2006 elections, Besigye was arrested in chaotic scenes in the outskirts of Kampala, leading to mayhem and a stint in prison as the campaigns went on. He was even nominated while in custody in the Luzira maximum prison; but it was during that election that he put up the strongest showing scoring 37 percent of the votes cast, probably winning a massive sympathy vote. At the time, he was prosecuted for alleged rape and treason, cases that were dismissed as unfounded.

The elections in 2001 where Besigye first campaigned against Museveni was marked with violence that was spearheaded by Kalangala Action Plan a pro Museveni militia, that visited harassment and violence on Besigye’s supporters. In 1996 Museveni’s then challenger Dr. Paul Ssemogerere had to put up with persistent violence and intimidation in mostly western Uganda, with the Museveni campaign going an extra mile of putting up a macabre display of skulls and bones of victims of the country’s previous civil wars in newspaper advertorials, with the direct messege that a vote for Semogerere would amount to a return to that horrific past.

The climax of the elections as a peaceful and largely civil exercise was driven home by Museveni’s willingness, for the first time, to engage in a televised debate with all his competitors, coming out unscathed. This was a high point in Uganda’s electoral history. His involvement in the debate was unprecedented as he has in the past refused to acknowledge that his opponents have anything to offer the country. Having allegedly overruled his aides and core campaign team not to engage in the debate, it became obvious that whereas he may have failed to deliver on many electoral promises over time, he has a clear vision for the country and is able to articulate it with clarity.

Dr. Besigye had promised a campaign of defiance, on the basis that there was no possibility of a free and fair election under electoral commissioners appointed by Museveni. Nonetheless he has conducted a rather peaceful campaign with less to show for the promised defiance. In effect this has left many observers predicting that in case of a loss, the main opposition leader will launch mass demonstrations in protest of what is expected to be fiddled results.

Like in the aftermath of the 2011 elections when Besigye launched the walk to work protests, the expectation is that the security forces will launch a crackdown on any opposition protests. Therefore, the election violence that did not come to pass during campaigning, is likely to be seen  post election in the event the opposition rejects the results and goes on to protest. Besigye indeed, has made it clear that he will likely launch protests  in case the results are not a reflection of the will of the majority of electorate.

Unlike in the past when Museveni allowed regime allied militia like the Kalangala Action Plan to unleash violence on his opponents, it appears he has overruled any suggestions from his courtiers to come down hard on his opponents. When Besigye first launched his presidential bid in 2000, Museveni unleashed a warrior instinct that had traditionally been reserved for armed rebels. The drama and suspense around the candidature of Amama Mbabazi had initially pointed to a frustrated Museveni who would crack down hard on his former NRM ruling party ally.

Apparently, after many years in power, with the country at peace, having vanquished his military opponents, the regime chose persuasion of opposition supporters especially those of Mbabazi. This has proved to be a more potent strategy than unleashing violence and turning the opposition into martyrs, something that could easily translate into a sympathy and protest vote.

As widely expected, if Museveni retains power, it remains to be seen how the opposition will react. If they launch protests, the indication is that the security forces will crack hard on them. Already,  security forces have been deployed on the streets of Kampala and anti riot hardware was recently imported in anticipation of post election violence. If the elections have been; largely peaceful, the final verdict will be decided in the aftermath of the voting and announcement of results.