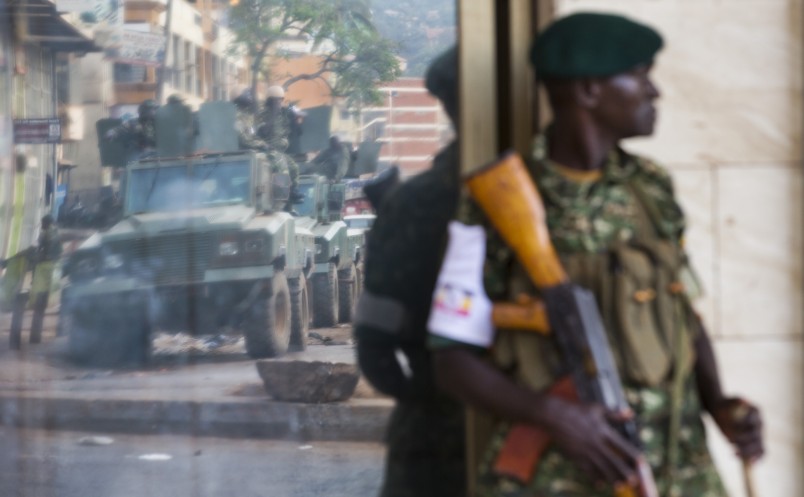 After a three month campaign the Electoral commission announced that Museveni had won an assailable 5.6m votes or 60.5 percent of votes cast in the February 18 poll.

Oerennial contender Kizza Besigye who has run against Museveni and lost four times in a row, polled 3.3 million of the votes which was 35 percent of the votes cast.

Former Prime Minister Amama Mbabazi, who broke away from the ruling NRM (National Resistance Movement) party to challenge Museveni for the presidency garnered a paltry 132,574 or 1.43 percent of votes cast.

When he launched his campaign it was expected that Mbabazi woud draw votes from Museveni which would force a rerun but his campaign fizzled out quickly and opinion polls never saw his appeal climb above five percent.

According to Uganda law a winning presidential candidate needs to win 50percent plus one vote to prevent. a second round of voting.

The resultt is consistent with a series of opinion polls that have been conducted since July last year that put Museveni in the lead followed by Besigye and Mbabazi.

Museveni ran on his record of having overseen the longest period of economic growth since independence in 1962, improvements in physical and social infrastructure and pacification of the county, parts of which were dogged by years of civil war.

His critics however pointed to growing wealth inequalities, a breakdown in social services and ballooning corruption during Museveni’s three decades at the helm of the small east African country, to try and convince Ugandans to vote him out of power.

Besigye has dismissed the result and called for an independent audit, a suggestion that has been welcomed by Prime Minister Ruhakana Ruganda.

While they will question the integrity of the result they will have to ask themselves whether they did enough to build the structures to run the campaign and whether Besigye has not passed his sell by date, after challenging Museveni four times in row and losing every single time.

The European Union election observers group were scathing in their criticism of the Electoral Comission’s handling of the polls, citing delays in the delivery of voting  materials in the capital Kampala but other observer groups said despite the glitches the polls were held in peace.

While there might have been loud opposition to Museveni’s candidature in the urban areas, it seems clear that the superior organisation of the ruling NRM made the difference.

Critics say the rulig NRM had access to financing from the treasury none of its rivals could muster and its fusion with state structures and it easier to mobilise supporta charge the NRM vehemently denies.

Besigye’s rejection of the result is cause for some concern.

Following his 2011 defeat, Besigye mobilised thousands of unemployed youth to stage protests against the rising cost of living,  leading to running battles with the police, causing economic and political uncertainty.

Besigye has not discounted a return to those protests.

The security agencies have said they are ready for any eventuality, already holding Besigye under virtual house arrest in an effort to prevent him marching on the streets in what he sees as a deeply flawed election.

According to Uganda law he has up to ten days from the day of declaration to appeal the result.

Despite being the leading opposition figure in Uganda his party, FDC (Forum for Democratic Change) and the opposition leaders may want to front someone else at the next election.

After losing 2011 Besigye said he would never run for the presidency while Museveni was still in power or while the Electoral Commission under Badru Kigundu was still in charge.

He had an about face last year, challenged the leader of his party General Mugisha Muntu to be the flag bearer splitting his party down the middle.

Mbabazi who came in a distant third is clearly tainted by his long association with the ruling NRM and it is thought unlikely, with a formal party backing him – he ran as an independent, to be able to mobilise enough opposition to mount a more credible campaign next time.

The opposition too have some serious soul searching to do. This the first election during which the pre-independence parties – the Democratic Party (DP) and the Uganda People’s Congress (UPC) have not fielded a candidate. The parties, whose prospects have been in decline since 1986, when Museveni banned political party activity, have seen their structures weakened, hijacked or decimated all together and they do not resonate with one of the most youthful populations in the world who did not witness their glory days.

For the ruling NRM they too have hit a cross roads with this election.

Museveni won less of the vote than he did in 2011 when he won 68.38 percent but his hold on power seems as firm as ever. Whereas his party will once again dominate the house – partial results show NRM won 169 seats to the FDC’s 29, at least nineteen of his ministers have been shown the door.

The loss of his ministers, some of them a throwback to the five year old guerilla war that brought him to power in 1986, will allow him some leeway to bring in fresh faces into his cabinet.

This maybe his most important cabinet yet, because under Ugandan law this is Museveni’s last term given the age limit barrier of 75 years. Museveni turned 71 in September, and his choices may signal his succession plans.

With Mbabazi, who was the perceived long term heir to thrown out of the way, it is not clear who Museveni may choose to front for the next election.

An amendment to the constitution to lift the age limit of presidential candidates is not out of the question entirely, especially if the NRM can control at least two-thirds of parliament as they did last time and look more than likely to do again this time.

Museveni goes into what may be his final term with the challenges of finessing a succession plan or muscling an constitutional amendment to allow him to run yet again; free of his bush day cronies putting as to p to corruption and reducing wealth inequalities or allowing new players to continue feeding off the corrupt networks established by the previous generation; championing a drive for better service delivery, as a way to cement his mark on history or let services continue into decline safe in the knowledge that his political position is secure – at least for the next five years.