Home>Articles>Nigeria currency crisis: Naira in a free fall for all
By Erukilede Julius - 22 February 2016 at 7:30 pm 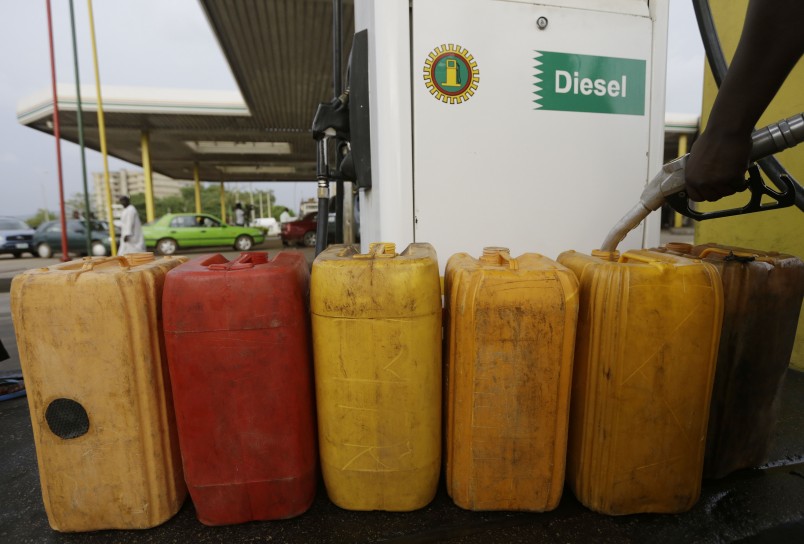 It is no longer news that Nigeria is the biggest market in Africa. Over the past few years, the economy grew at a pace that defied many economic indices to walk the ladder as the number one economy in Africa. However, in recent months, the chicken has come to roast. Oil, the commodity that supplies over 70% of Nigeria’s total revenue crashed at the international market resulting in the most drastic downward slide of Naira, Nigeria’s currency.

Since oil price nose-dived, the Central Bank of Nigeria (CBN) has struggled to meet the dollar demand of Nigerians who throng to banks and Bureau de Change (BDC). As dollars dry up at the official centres, businesses boom at parallel market destabilising the currency market.

Various stakeholders including the IMF and Sanusi Lamido Sanusi, the influential former CBN government called for the government to devalue the currency to reflect the current realities. But the call was very unpopular among Nigerians. When Christine Lagarde, the IMF President visited Nigeria in early 2016, pressure groups requested Nigeria to reject any overture by IMF for Nigeria to devalue Naira. The government rejected the devaluation group and maintains its defiance to devaluation, advising all proponents of devaluation that the government will not join hands in killing Naira.

But the sustained, unmet demands over the past few weeks resulted in the massive depreciation of the Naira against other major currencies. In the week of 14th to 20th February, 2016, Naira set a new record, an unprecedented 15 per cent week-on-week decline, the biggest fall in many decades. A dollar was exchanged for between N370-N400 at the parallel market against the N197.50k official rate. In a country where majority live below the poverty line, the free fall invariably helps price rise of stable foods and astronomic fall in the living standards.

What started as manageable challenge is turning into full blown economic crisis. Virtually all he sectors of the economy has felt its impact. Nigeria’s former buoyant foreign reserve has declined by $1.14billion, a record 23 per cent in the last one year. Non-Performing Loans (NPLs) in commercial banks, according to statistics averaged 4.7 percent last year and may increase to 10 percent in the medium term by 2016, due to the bank’s exposure to oil and gas sector. At present, NPLs in 17 banks are estimated at over N9.9trillion, even as the World Bank’s loan to Nigeria stands at over $6.29billion.

Many analysts have however attributed the current crisis to a cocktail of bad choices, clinging to antiquated ideas in a changing economic environment and incoherent monetary and fiscal policies.

Speaking on the topic, Sanusi Lamido, the former CBN governor asserted that the way out of this current crisis is for government to admit to the reality by devaluing Naira. He argued that despite the government’s position, naira has already been devalued. He maintained that Nigeria’s President Mohammadu Buhari and the CBN were only subsidising the private sector by selling dollars to the sector at N200 as against the real market price.

In the interview he granted to the BBC Africa Business Report, he said; “this argument I think has first of all been framed wrong, it is not an argument about do we devalue or do we not devalue. The naira has already been devalued.” “What is the value of the naira?” It’s what you can get for it, what you can get for the dollar in a free market between a willing buyer and a willing seller – and it is not 197.

Another respected Nigerian Economist, Bismark Rewane, the CEO of Financial Derivatives Company stated that; “Nigerians are perplexed at the endless slide of their currency, which is now trading at the lowest point ever. This is happening even when the oil price is up at $31 barrels per day. However, it seems that the major course of discourse has been missed.”  “The debate, whether to devalue the Naira or not, is not the real issue. The discourse should be whether we need an exchange rate policy or not. “The absence of a policy is a recipe for economic anarchy and a race to the bottom”.

Commenting on the same subject matter, the South West Chairman, Association of Bureau de Change Operators of Nigeria (ABCON), Mr. Taiwo Ebenezer attributed the crises to inconsistencies in CBN policies. He made this position known while speaking as a guest on Channels television flagship talk show, Business Morning. He blamed the scarcity at the door steps of CBN who excluded its members from taking part from the weekly CBN forex allocation. He argued that SMEs that sourced their dollar needs from their members have been negatively hindered by the CBN policy. He predicted the appreciation of naira to atleast N250 should CBN allowed its members to draw from the $20billion remittance from Nigerians abroad, dollar accessed from international oil companies, exports proceeds and other windows as part of the autonomous market sources.

Also reacting to the issue, John Litwack, the World Bank’s Lead Economist, argued that trying to hold on to the exchange rate when the economic fundamentals have moved can be counterproductive as the country may end up losing a lot of reserves.

Nevertheless, despite the fact that economic index known to man calls for an urgent decision to be made by the Federal Government before all control is lost, government opposition to devaluation remains strong. The government ably supported by the powerful governor of Edo State, a former labour leader and the Nigerian Labour Congress amongst other groups have bluntly refused any form of devaluation. Their argument bothers on the fact that such devaluation will impoverish the already poor and heavy burden Nigerians.

But the position has support from other experts. According to Mr Temitope Oshikoya, CEO/Chief Economic Strategist at Nextnomics, he cautioned the government against devaluation. He maintained that “official devaluation may not be the answer to adequate dollar inflow”. “We have heard countless of time that capital inflows are just waiting in the wings to pour back in if only Nigeria would devalue its currency.

He argued that recent evidence from emerging markets suggests that they should go and tell that to the marines. “We note here that in contrast to perceived wisdom there is no guarantee that capital inflows would surge into the country following further massive depreciations. “For many emerging markets, where depreciations have been considerably greater, weakening exchange rates have aggravated current problems associated with rising foreign-currency debts. “But, thus far, there is little to suggest that the depreciations have had much of a salutary effect on economic growth, which for the most part has remained sluggish.”

Tope Fasugba, one of Nigeria’s foremost Economists also argued; “…may we remind the Apostles of devaluation that contrary to what the textbooks say, in reality devaluation only works as a boost for countries with advanced value-added exports (like China) with a strong foot in the door in international markets. Even they don’t devalue like 30% at once. They manage it strategically, with the power to revalue when they desire. It never works for beginners. It has never worked for any African country. Ask Ghana. Whereas it is equally bad to maintain an overly strong currency with no fundamental backing, there is nothing wrong if we curb imports a bit, rather than lazily and mindlessly leaving our currency and economy to the vagaries of the so-called forces of demand and supply.”

However, looking at both sides of the divide, Nigeria’s present economic condition has no quick fix. The reality is that it will take a little time for the economy to stabilise. This is even subject to government taking the right steps to fix the many policies inconsistencies that characterize this administration. Government must be ready and willing to take tough decision whether it favours the key actors’ opinion or not.

As it is, Nigeria is slowly but surely approaching one of its toughest and roughest periods in decades – inflation, job losses, business closures, increasing inequality, shut out from global markets, possibly a banking crisis, and full-blown recession. The Buhari led government should not feign ignorance of the plight and concerns of Nigerians. While anti-corruption is important, but the interest of Nigerians is vital– all hands must be on deck to move the economy forward. The government must act now.