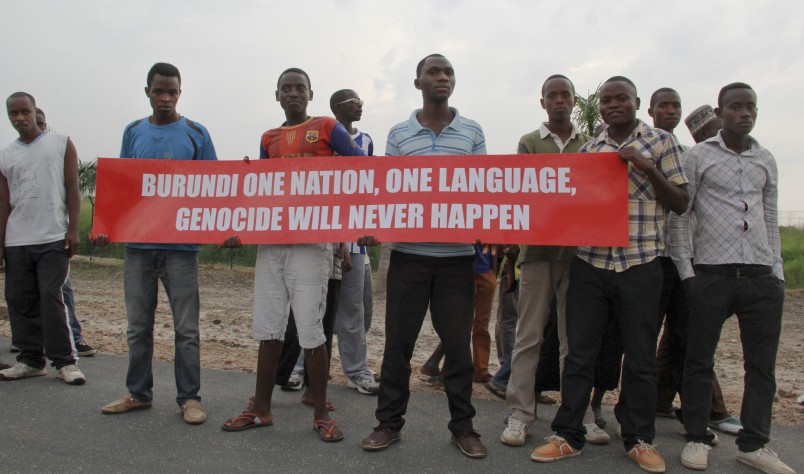 As five African leaders arrived in Bujumbura Thursday, they certainly are engaging a more emboldened President Pierre Nkurunziza who apparently, has regained the upper hand in the ongoing conflict. This comes after a confidential report to the United Nations Security Council by experts accused Rwanda of training anti Nkurunziza rebels. In the same week, videos emerged on the internet of “captured guerrillas” claiming to have been trained in Rwanda and sent back to Bujumbura to launch attacks in the capital.

Earlier, President Paul Kagame of Rwanda took to twitter, sending off tweets against the actions of the government of Burundi. This marked a new low in the increasingly frosty and dangerous relations between the two neighbours. The demonstrations by thousands of Barundi in Bujumbura and near the border with Rwanda few days ago, underlined the sour relations between the CNDD government of Pierre Nkurunziza and Kagame’s Rwanda. The demonstrations which came days after the leaked report to the UN Security Council, symbolises the fact that Nkurunziza  does not only have the initiative on the diplomatic front, but also on the streets.

Whereas Kigali denies plotting to destabilise its southern twin neighbour, some indicators point to the opposite. At the minimum, the Kigali establishment does not wish Nkurunziza well!. Kagame has repeatedly made his disdain for Nkurunziza known; including not so subtle ridiculing of his faith (evangelical born-again religiosity) and accusing him of not delivering much for his people! Official media commentariat in Kigali has been decidedly anti Nkurunziza. Establishment leaning columnists in Kigali have repeatedly poured scorn on Nkurunziza and his top aides; most  notably the vocal Nyamitwe brothers; foreign minister Alain Nyamitwe and Presidential communications advisor Willy Nyamitwe.

It is important to understand the basis of the bad blood.  To get insight into the frosty relations between the ruling  predominantly Hutu CNDD of Burundi and Kagame’s Tutsi led regime in Kigali, one needs to look back two decades ago. In 1996, Kagame invaded the eastern Congo Hutu camps in a pre emptive strike against the former Hutu army of Rwanda and their Interahamwe allies, that were responsible for the deaths of close to a million people in the 1994 genocide. Subsequent interventions in Congo by the Kagame government propped up predominantly Tutsi rebel groups.

RCD Goma, CNDP, and later M23 were all predominantly Tutsi led groups whose major stated aim was the protection of the Tutsi populations of eastern DRC.  And Kagame assumed the role of guarantor of Tutsi survival in the region. Whereas the military campaigns they championed also served other interests; mainly economic- buttressed by control of vast swathes of land where there were no Tutsi populations, but rich in resources like coltan, gold and other rare metals, the underlying motive was understood to be the protection of Tutsis from genocide.

Now, Rwandan officials have repeatedly made the claim that the notorious Forces for the Democratic Liberation of Rwanda (FDLR) have been engaged by the Burundi regime in their campaign against Nkurunziza opponents. For Rwanda that has historically engaged in foreign war as a result of the FDLR and its precursor Hutu power organisations having bases in eastern DRC, this would be a pointer to the intentions of Kigali. Going by the logic of the wars of the 1990s in Congo and subsequent support for Laurent Nkunda’s CNDP and M23, then Kagame’s army would directly or indirectly intervene in the ongoing internal conflict in Burundi as a preemptive strike against FDLR and by extension, its supposed alleged allies in Bujumbura.

Another factor to look at is that, Rwanda and Burundi took different paths in the aftermath of their respective ethnic based conflicts, despite the fact that they have a similar ethnic divide. Rwanda has over the years downplayed the role of ethnic identity as a societal cleavage on which political and social policies could be based. Yet Burundi in its post war settlement opted for a bold approach; acknowledging the role of ethnicity and put in place a constitutional arrangement that allocated proportional representation to the two main ethnic groups. A case in point is that the army and cabinet must reflect both Hutu and Tutsi representation with the latter guaranteed 40 percent of positions in cabinet and other institutions regardless of who wins the elections.

In defending the obtaining political arrangement in Kigali, the establishment has sometimes had to pour scorn on the alternative Burundi arrangement, noting that it is ethnic identity politics that was at the root of the 1994 genocide. And thus Kigali constantly reinforces the notion that ethnic identity is no longer a factor in Rwanda and as such reconciliation has been achieved.

In Burundi, it is apparent that although the post conflict arrangement recognised the role of ethnicity and sought to openly guarantee ethnic representation,  the current Burundi conflict has been waged for political power rather than ethnic dominance. The military and political opposition against Nkurunziza has a mix of both Tutsis and Hutus: Failed coup leader General Godefroid Niyombare is Hutu as well as longtime Nkurunziza rival Hussein Radjabu, and they are both luminaries of the CNDD/FDD armed struggle. Another prominent opponent Alexis Sinduhije is Tutsi. Though Nkurunziza’s support base is historically and predominantly Hutu, he also enjoys  significant support from the Tutsi community. Therefore, the conflict is more about political power than any underlying ethnic tensions, which the anti Nkurunziza narrative has tried to play up.

Another touchy aspect is the closeness between Burundi and Tanzania at a time when  the latter, in alliance with South Africa championed the Force Intervention Brigade that decimated the Kigali sponsored M23 in eastern DRC. By extension Burundi was seen to be in cahoots with Tanzania, South Africa and exiled Rwandan dissidents who were seen as advisors to intelligence officials in South Africa and Tanzania during the fight against M23. It was a matter of time before Kigali would retaliate, and the first indicators were seen in the media; both social and mainstream as regime functionaries in Kigali assailed the Burundi establishment.

enooing forward, it is apparent that Nkurunziza has deftly played his politics and wriggled his way from the bottom of a fiasco that he had been a major party in creating. In addition to a shift in international opinion, regional players like Uganda’s Yoweri Museveni chose a soft approach to Nkurunziza. And the African Union backing down on sending peacekeepers has also helped him regain the initiative. His opponents are now on the defensive. The effect is that Nkurunziza has been able to downplay the internal issues in his country, creating the impression that the strife has a lot to do with a “meddling bad neighbour.”  By agreeing to hold talks with all parties in his recent meeting with Ban Ki Moon, Nkurunziza, knew that he will be negotiating from a position of strength rather than weakness.