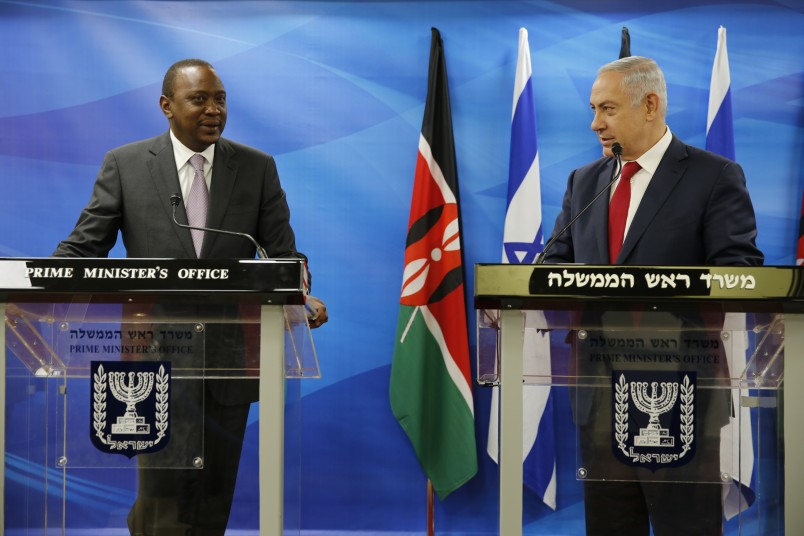 President of Kenya Uhuru Kenyatta visited Israel in recent days amidst much talk of deepening engagement between Israel and wider Africa. The demonstrates the potential for a strong future between the two nations that already shares a storied past.

As with Kenya, Israel’s relationship with a number of African nations is traced back to the shared struggles for independence in the early decades of the post-war era. Yet, notwithstanding the strength of bonds forged in the pursuit of sovereignty, this alone is not enough to sustain a relationship in the 21st century, amidst a rapidly changing world. This is why Kenyatta’s visit to Israel is significant, both for what it says; and for what it omits.

Israeli relations across the African continent can broadly be divided as pre-1973 and post-1973. Post-World War 2 the Israeli nation sought diplomatic recognition of its state around the world, and on the African continent found a number of nations sympathetic to their cause. While relations differred nation by nation, entering a post-colonial era in which a number of African nations sought their own independence; the formation of a alliance between Israel and numerous African nations was a mutually beneficially pursuit. This was especially so with a number of Sub Saharan nations of Ethiopia, Ghana, Kenya, Nigeria and South Africa. Varying fortunes in the relationships occurred in decades between the end of World War 2 and 1973, but before the outbreak of the Yom Kippur war thirty three African nations held diplomatic relations with Israel illustrating the strength of the Israeli state’s ties on the continent.

The 1973 Yom Kippur War had a devastating effect on Israeli relations among the wider African continent. Though some nations remained aligned – more felt compelled to break from Israel by emphasis upon collective action by the Organisation for African Unity. It represented one of the most crucial events in Israeli-African relations since Israel’s founding up to 2016. The dynamics that contributed to each of Israel’s relations with its many African partners is complex, but the strength of the collective response of the OAU – combined with the contention that Israel by crossing the Suez had intruded upon African land – led to the widespread deterioration of relations across the continent.  Even today, though relations have improved with many nations, they remain informed and impacted by the events of 1973. Yet, with Kenyatta’s visit can be seen the commencement of a new chapter.

Israeli Prime Minister Benjamin Netanyahu sought to underscore this visit as an opportunity to start anew and forge a stronger relationship. While Netanyahu has visited Africa previously, making a trip to Uganda as a minister in 2005 (where he paid tribute to his brother Yoni killed in the 1976 Entebbe hostage rescue) his upcoming visit to honour the anniversary as prime minister shall be his first since his appointment and the first by any holder of the office since 1966.

From a regional perspective Africa offers both opportunities and challenges for Israel. Though it seeks closer relations with African nations once more, the reality of democratic transparency looms. Israel’s relationship with Kenya is illustrative of this – for notwithstanding the immense symbolism of its past relationship – the confronting reality exists in Kenya’s public sector held to be one of the most corrupt in the world.

However, Kenya and Africa as a whole can offer Israel a clear incentive when it comes to forging closer ties as this will open up major markets for the country especially in the tech sphere. The continent offers a far greater population and geographic landscape upon which to grow trade and commercial interests. Israel at present is held to be the world leader in cybersecurity and internet penetration. The chance to grow a greater dialogue in progressing Africa’s startup scene and its own internet connectivity is an area which is ripe with opportunity.

Then there is the security sphere. With Israel residing in a Middle East at present facing immense instability with the Syrian conflict and the rise of ISIS (as well as the broader experience of its own defence force in counter-terrorism) the opportunity for genuine progress in the shared effort to combat terrorism is considerable. Israeli resources and experience could be advantageous to an African region battling Al Shabab and Boko Haram amidst other instabilities, so too does containing ISIS and preventing their establishment of a foothold within Northern Africa (especially in Libya) represent a direct security concern for Israeli interests.

Ultimately, the extent to which the relationship grows between Israel and the African region looks likely to be addressed during Netanyahu’s upcoming visit in July. Whilst this latest chapter represents a clear effort to deepen Israeli relations on the continent, it has in-fact been quietly doing so since 2014, suggesting both the emergence of a longer and underlying strategy to complement and reinforce this new phase.