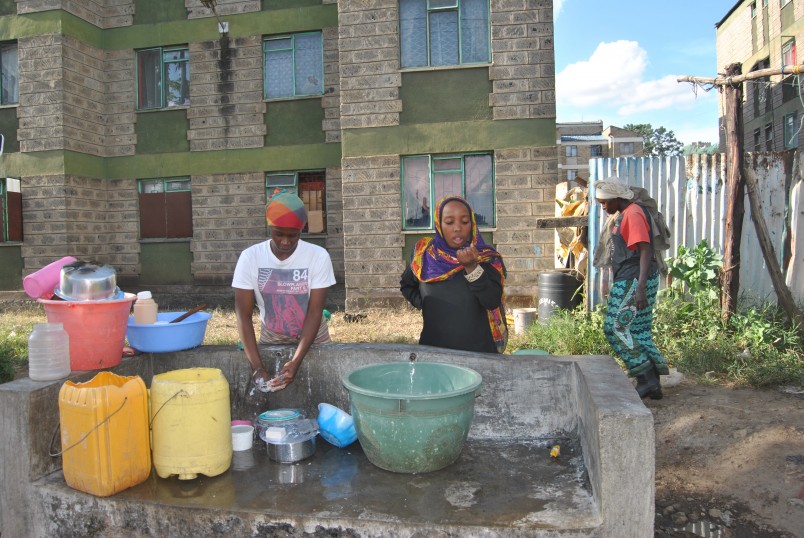 With sixty percent of its population living in informal settlements, Nairobi City is yet to fully address the problem of water accessibility and sanitation for more than half of its 3.4 million residents. The government is now planning to change this.

Barely two miles east of Nairobi’s central business district,
sits Majengo slum, a sprawling and congested settlement home to more than a hundred thousand people. Like many other slums in the city, water shortage is regular, sanitation is mostly non-existent and blockage of the trenches that serve as open sewage is a daily sight.  Pungent smell emanating from open sewers fills the air and heaps of garbage litters the narrow streets. For residents, access to water is a problem.

It is 4.00 pm and Regina Syokau, 40, a resident of Majengo still has another basin full of clothes to wash. She hopes to finish in an hour’s time. She has been washing the whole day and for her work she will earn 5 USD. Regina washes clothes for a living. Her place of business is a roadside communal water point at the edge of the slum near Pumwani Highrise, a section of Majengo which was upgraded by the government.

Half a dozen water points are situated in various points in the slum to serve the entire population. Residents queue at these water points to fetch water for their domestic use. Regina’s biggest challenge is the regular water shortage in Majengo. “Sometimes there is no water in this tap even for a whole week and therefore I can’t wash any clothes to get an income,” said Regina. 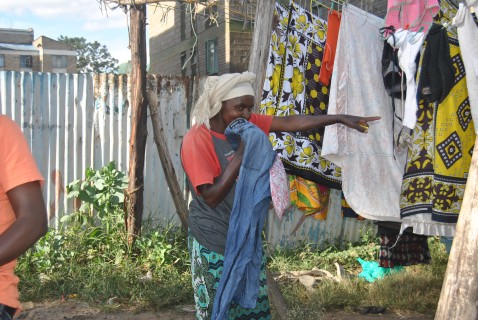 When the taps run dry, which happens often, Majengo residents have to buy water from vendors or go to neighboring settlements for water. Hamisi Macharia, 38 is the Chairman of New Bidii Youth Group a community based organization which operates a public toilet and a car wash. He decries the constant lack of water in the area saying that it affects the running of their business. “When there is no water we have to buy and that increases the costs we incur in running the public shower and at times we are forced to close it all together,” said Hamisi.

For Regina, she can’t wash her clients’ clothes when there is no water. Such instances mean losses not only for New Bidii Youth Group and Regina but for many other business people in Majengo and other informal settlements in Nairobi. Regina remembers a time she had to walk all the way to Mathare, three miles away to fetch water for domestic use and hence losing business.

Houses in Majengo do not have toilets and residents have to go out and pay to use public toilets. New Bidii’ is one among the half a dozen public toilets in the slum. Lack of water in the toilets is therefore a huge problem that affects everyone in the whole slum.

Water connection to buildings is done by the Nairobi City Water and Sewerage Company at a fee of 5,000 Kenya Shillings (50 USD). Most residents of Majengo can’t afford this amount and the landlords fear to pay for water connection as tenants may not pay monthly water bills. The water they fetch in communal water points is free of charge.

Besides the problem of water connection, sanitation is a glaring problem in the slums. In Majengo, sewer lines are non-existent such that garbage and waste water are disposed to water drainages. The buildings in Majengo are old and they used to have pit latrines but people now use public toilets,” said Hamisi. He believes that the county government has neglected the slum in addressing the issue of sanitation. “When blockage occur in these roadside trenches, county government workers come and fiddle with it but a few days later the trench blocks again,” he said.

Last week, delegates from all over Africa met in Nairobi at the 18th Africa Water Association congress and Exhibition. The theme of the congress was “Sustainable Access to Water and Sanitation in Africa” and among the issues discussed was innovations for increased availability and improved access to water supply.

Speaking at the conference, Nairobi City Water and Sewerage Company MD, Eng. Philip Gichuki, stated that the government is working with key financial partners like the World Bank and The Central Bank of Kenya to ensure that every household in the formal or informal settlements are connected to clean, safe, enough accessible water. “Currently, the government is concentrating on ensuring that the distribution network of water is seamless so that every Kenyan has access to this important commodity,’’ said Eng. Gichuki.

For Hamisi, the best solution to the water accessibility problem in Majengo, is for the government to construct more water points. “Water connection to our homes is not an option because most people will not be able to pay the bill every month. Furthermore, the houses are small and squeezed. More water points will reduce the long queues that people make here when fetching water,” said Hamisi.