Home>African Future>How one women's group is fighting climate change in Uganda
By Diana Taremwa Karakire - 26 May 2016 at 3:07 pm 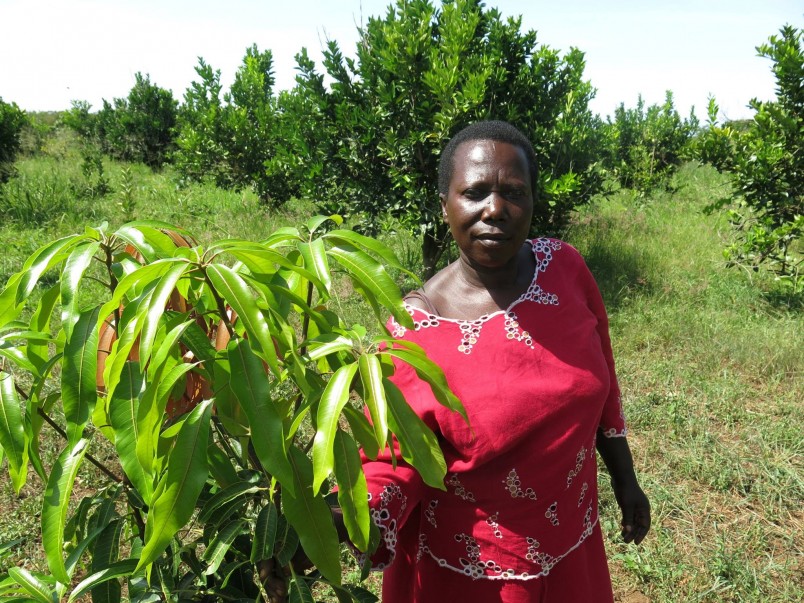 On a slanting hill, Beatrice Rukanyanga looks over her lush green fruit garden boosted by weeks of steady rains, a rare occurrence in this part of the country after seasons of back-to-back droughts. Beatrice started fruit tree growing after joining the Kwatanisa Womens Group, a local group in Uganda’s Hoima district that aims to empower local women with modern farming techniques for environmental conservation and climate change adaptation.

“The weather has been much better this season,” says the 36-year old single mother. “The last three seasons were terrible with very little rains.” Droughts have been a common feature in the area in recent seasons and this climate change-induced phenomenon only confirms that Uganda is vulnerable. According to the United Nations, countries in east and central Africa received the lowest amount of rains in the last 50 years, due to El Niño induced drought. Millions of hectares of crops were decimated leaving a record 36 million people facing hunger across the region. Although El Niño was expected, many believed that the climate phenomenon would bring more rains, but instead it brought one of the worst droughts ever recorded in the region, the UN says.

According to Monica Magambo, the group leader, Kwatanisa is carrying out fruit tree growing as a way of building resilience to the climate change reality in the area, as an environmental conservation technique as well as boosting food security.  “The fruit trees conserve the environment by contributing to reduction of greenhouse gases in the atmosphere and provide protection against flooding during heavy rains,” she explains. “Fruit trees have broader leaves that can absorb carbon emissions, especially mango and jackfruit.”

“We realized that people were cutting down trees at an alarming rate and could not conserve the trees for the sake of conservation that is why we decided to go for the fruit trees because they are multipurpose,” she adds. “No one would want to destroy his or her own source of livelihood.” But Magambo is also worried about plans for increased oil production in Uganda, a major source of future greenhouse gas emissions in the country. Though their contribution is small, she says, the fruit trees planted by Kwatanisa will act as carbon sinks. The group has plans to plant an additional 10,000 trees per year with the target of doubling annual plantings over the next five years. With these trees they hope to see livelihoods improvement through income generation from the fruits and ensure food security.

Kwatanisa also conducts sensitization meetings in the community, to help people appreciate the importance of fruit tree growing. “Our ultimate goal is to encourage the communities to take part in local and national efforts in environmental conservation and in curbing climate change.”

According to Uganda’s Ministry of Water and Environment, the impacts of climate change can be seen in recent droughts and floods, especially in the low lying areas. These changes are already influencing many critical resource systems, including water and food, both essential to maintaining human health. Over 80% of Uganda’s population is rural and dependent on rain fed agriculture, which is prone to impacts of climate variability. As a result, the adverse climatic conditions also have negative impacts on the economy and the overall well-being of the people.

Joseline Nyangoma, an environmental officer for Hoima district says that the lush ecosystem that used to characterize the area is diminishing and the future of many people is increasingly uncertain. Since women are the primary land users, she adds, it’s good to see groups like Kwatanisa take on such activities to mitigate these climate-driven risks.

Hoima district ranks among the most populated districts in Uganda with a population density of 156 according to figures from Uganda National Bureau of Statistics. Since oil was discovered in the district in 2006, the numbers of people have been steadily increasing, which has led to mounting pressure on the district’s land and resources. Deforestation has also increased as many trees have been cleared to pave way for settlement and infrastructure developments. There has also been encroachment on protected areas such as forest reserves.

Doris Atwijukire is a programme officer at Africa Institute for Energy Governance, a local non-profit that has been supporting the Kwatanisa women’s group. She says that because the livelihoods of women in Uganda are so closely tied to the land that they must take action or it will be much tougher to survive. “Kwatanisa’s fruit tree planting initiative is the way to go and should provide an example to other rural communities in the country,” she says.

Uganda recently signed the celebrated climate agreement in Paris late last year to reduce global warming to less than 2 degrees Celsius at pre-industrial levels. Chebet Maikut, the commissioner of the Climate Change Department in the Water and Environment Ministry, says that the Ugandan government remains committed to reducing climate change and has developed a National Adaptation Programme of Action to address immediate and urgent issues. Under this programme, project activities such as implementing country-wide tree planting projects similar to Kwatanisa’s community based approach are planned.

Isaac Kabongo, the chairman of Climate Action Network Uganda, a coalition for different civil society organizations dealing in climate change issues, says that government should also prioritize the exploitation of Uganda’s vast potential of renewable energy sources. This would reduce the traditional reliance on biomass energy, which is responsible for depleting forest cover and contributing to carbon emissions. “There is need to adapt to the inevitable effects of climate change and facilitate the development of techniques that can assist increase resilience among rural communities,” he adds.

This story was supported through a grant from the Earth Journalism Network.