Home>Articles>Death toll rises for African migrants on capsized Mediterranean boat
By AT editor - 23 September 2016 at 5:06 pm 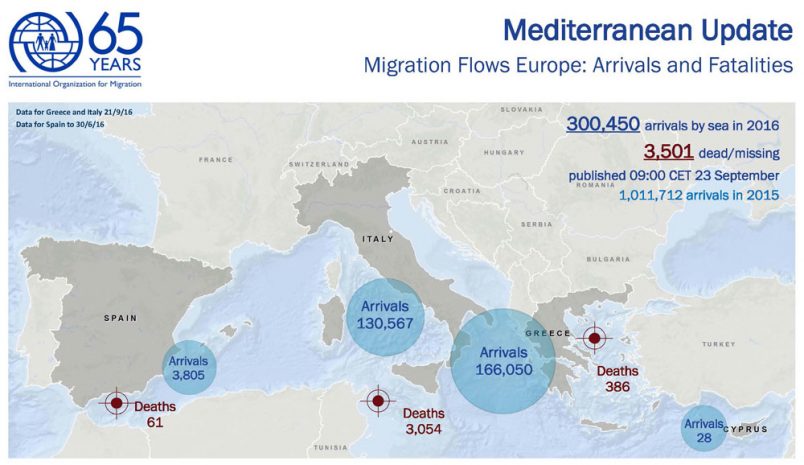 Egyptian authorities said Friday that nearly 150 bodies have been recovered since a migrant boat capsized this week in the Mediterranean Sea after leaving the port city of Damietta.

The accident adds to the rising 2016 death toll for migrants traveling through North Africa to Italy on the Central Mediterranean route, which has swelled to more than 3,000 – nearly 90 percent of all such deaths on the Mediterranean this year, according to the International Organization for Migration (IOM).

In this latest tragedy, boat passengers believed to be headed for Italy included migrants from Horn of Africa countries, as well as Egyptian nationals.

“The Egyptian route is used mainly by migrants coming from Eastern African countries – Eritrea, Somalia, Sudan – and some coming from the Middle East,” said Flavio di Giacomo, spokesman for IOM. “We do not know how many Syrians were on board, but generally speaking the number of Syrian arrivals has sharply decreased.”

UNHCR spokesman William Spindler said significant numbers of unaccompanied minors have been noted on the Central Mediterranean route this year.

Although much of the world’s attention remains focused on the Syrian plight and migration routes to Europe, Africans are most impacted on the dangerous route through Egypt to Italy. Nine of the Top 10 nations of origin for those journeys are in Africa, including Gambia and Mali, with migrants from Nigeria topping the list.