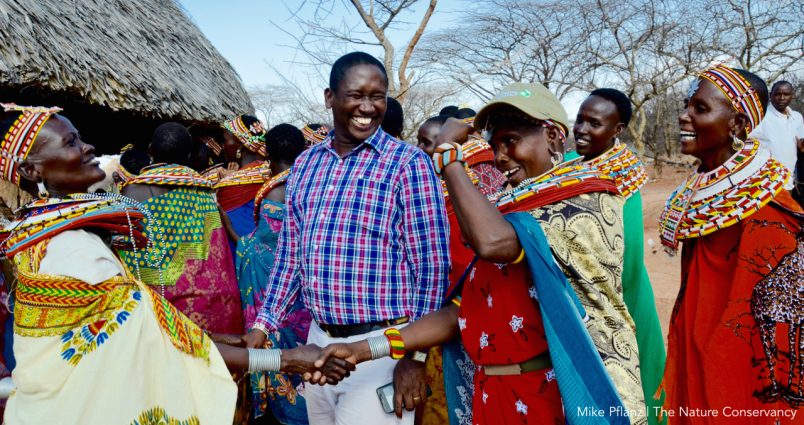 Lalampaa was selected for the 2016 award, which is given annually to an otherwise unsung hero for significant contributions to global sustainability. Lalampaa was chosen for the award and its $100,000 prize for his stewardship in protecting both wildlife and natural resources, and the Kenyan communities – now in four regional hubs – that are the foundation of the trust’s approach to a sustainable future.

“Wildlife is stabilizing or increasing,” said Lalampaa, who is quick to credit his neighbors and colleagues for the real success of the community resilience programs. “We have seen a 53 percent reduction in elephant poaching since 2012, and the black rhino, which was wiped out for 25 years, is back on communal lands in northern Kenya again. There are challenges, but we are on the right path.”

Lalampaa is a Samburu tribe member from the West Gate community in Kenya’s rural north. He attended the University of Nairobi to complete an undergraduate degree in social work. He also holds a master’s degree in project management and MBA in strategic management, and serves on the boards of Kenya Wildlife Service and The Nature Conservancy. He is the first African to receive the Bright prize.

“Through his work at the Northern Rangelands Trust, Tom has demonstrated the opportunity to promote economic development, sow peace among neighboring tribes and conserve Africa’s tremendous wildlife, all at the same time,” said Barton Thompson Jr., the Bright Award nomination committee chair and a professor of natural resources law at Stanford.