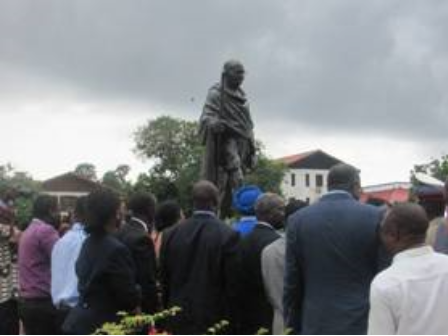 Echoes of the University of Ghana’s campaign to remove a Gandhi statue from campus were heard in the United States, as hundreds of people turned out for the unveiling of the “Gandhi Statue of Peace” in Davis, California.

Protesters in the college community met crowds with shouts that Mahatma Gandhi was a racist, and signs that accused the Indian leader – often viewed as a global symbol of nonviolent resistance and Indian independence – of being a child molester.

City officials in Davis said the 6-foot bronze Gandhi statue was a gift from the Indian government, and will be maintained with community donations. The Sunday installation in the city’s Central Park was planned to coincide with what would be Gandhi’s 147th birthday, local media said.

But protesters met speakers and participants with chants that Gandhi committed genocide and was a racist, contributing to what Mayor Robb Davis said was already a difficult situation.

Similar protests in recent weeks at the University of Ghana, where a statue of Gandhi was placed in mid-June, have caught international attention. Professors at the university, joined by students and community activists, petitioned for the statue to come down after charging that the Indian social activist’s own writings confirmed his racist views.

The anti-Gandhi sentiment has prompted Ela Gandhi, his granddaughter and a former member of South African parliament, to defend his contributions and ask that the values for which he died be the priority.

Gandhi, who attended her grandfather’s birthday observance in Durban, said the message of nonviolence and passive resistance remains important to the world.