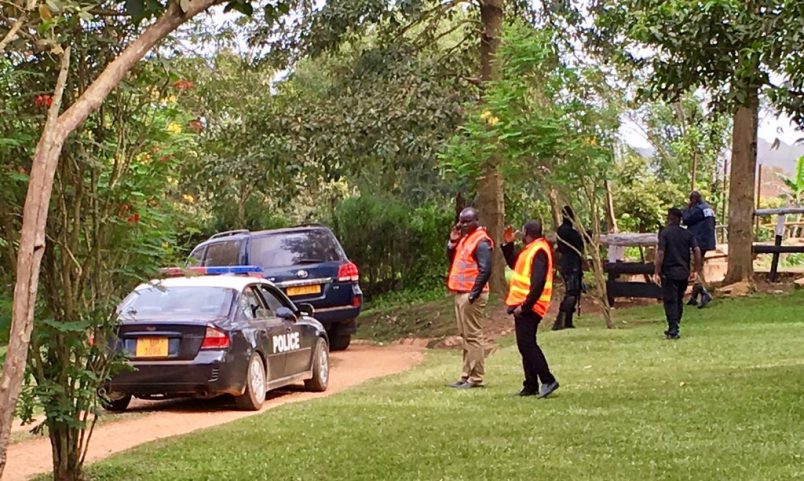 Ugandan politician Dr. Kizza Besigye was again stopped by police in Kampala Tuesday, this time while greeting supporters near the landmark Clock Tower at Entebbe Road.

Local media report that heavily armed police in riot gear blocked his travel and towed his car, while dispersing a crowd that gathered as Ugandans continue to welcome home the longtime opponent of President Yoweri Museveni.

Besigye’s return from London has led to confrontation since he stepped off the plane Sunday. He was immediately detained by authorities who grabbed him by the trousers, he said, and took him to his home in Kasangati before he could greet his Forum for Democratic Change (FDC) party colleagues and their supporters. The FDC headquarters has remained heavily guarded since Besigye arrived.

On Tuesday, Besigye was in the city attending to legal affairs that stem from ongoing treason charges lodged against him, a charge police have threatened his supporters with in their latest round of political battles with the Ugandan government.

Across the last 15 years, Besigye has challenged Museveni for the presidency and lost four times, most recently in February in a contest fraught with allegations of irregularities and calls for an independent audit.

Besigye subsequently swore himself into presidential office in May. The government’s response to that move added to the cycle of treason charges and house arrests that the FDC leader has known for years.

Besigye was not detained in the Clock Tower Entebbe Road incident. However, any processions or convoys are illegal, special forces police spokesman Andrew Kaweesi said Monday at a Kampala news briefing. Dozens of Kizza Besigye supporters have been arrested and detained in recent days.