Home>News>Missing Mutharika to return on Sunday, Malawi officials say
By AT editor - 11 October 2016 at 9:19 pm 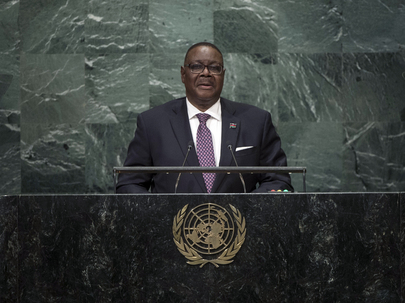 President Peter Mutharika will return to Malawi from the United States this weekend, the government said Tuesday.

State House Press Secretary Mgeme Kalilani sent a statement to local news outlets assuring Malawians that Mutharika, who left Lilongwe on September 13 to attend the United Nations General Assembly in New York City, is well and is scheduled to come home on Sunday.

His month-long silence has caused much speculation about Mutharika’s whereabouts and health. As the raised eyebrows and the grumbling about his absence mounted – along with rumors about his death – officials warned Malawians that making public statements about Mutharika based on rumors was a criminal act.

The situation has added to the sense that Malawi, one of the poorest and least developed nations in Africa, has been abandoned by both the existing political leadership and its opposition. Mutharika’s absence also is met with a cynical despair rooted in the nation’s chronic corruption, an issue that 69 percent of Malawians say their government has failed to change.

“We are lacking direction as a country, it’s like we are all in the grave,” said John Kapito, executive director of the Consumer Association of Malawi, during a weekend radio interview. “They will bury us all and thereafter they go back home to enjoy life. We don’t know what government or opposition parties are doing.”

Malawian activists and journalists have pointed out that they were told Mutharika would return last week too, but they still haven’t seen him.