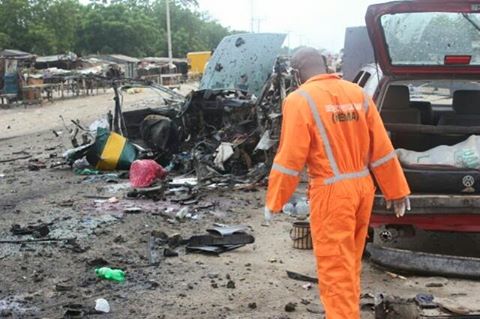 New waves of violence gripped Nigeria on Wednesday as the death toll rises in clashes in the Katsina State region, while a bomb blast in Maiduguri has claimed up to 18 lives in the nation’s northeast.

Boko Haram was believed responsible for the terror attack in Borno state, where a car bomb hit a convoy of vehicles destined for cities near the border with Cameroon, leaving 18 dead, Vanguard reports.

The vehicles were leaving the Muna Garage area with a military escort when the explosion occurred. This latest attack on Maiduguri, the capital of conflict-torn Borno, injured at least 15 others as passers-by were caught up in the attack.

The region remains at the heart of Nigeria’s humanitarian crisis, with more than 1.1 million displaced persons living in Maiduguri and a recent uptick in population at the Muna Garage camp, according to Médecins Sans Frontières. MSF and other relief organizations have described the ongoing refugee situation as catastrophic.

President Muhamadu Buhari extended his condolences to the bomb victims, even as Nigerian security forces clashed with Shiite Muslims in other states. Among the deaths are reports that at least nine people were killed in Funtua by Nigerian police, in clashes that an Islamic human rights organization said included live rounds and teargas used during the annual Ashura observance.

In Kaduna, four people were killed and the town’s Shiite Muslim school destroyed. The Premium Times reports that angry youths also burned down the home of the Shiite leader, but there was no official confirmation of the witness reports.