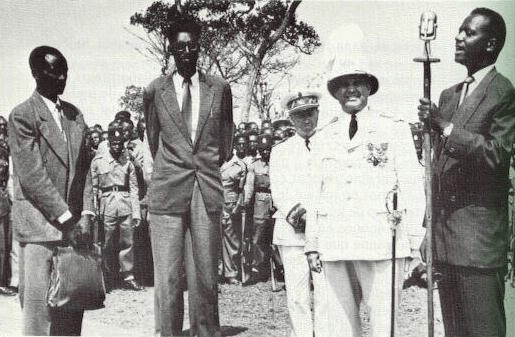 Jean-Baptiste Ndahindurwa, the final King of Rwanda before monarchy was abolished, has died in the United States.

His Majesty King Kigeli V Ndahindurwa, a Tutsi born in 1936, lived in relative obscurity in Virginia in his final decades but remained resolute about the viability of the Rwandan monarchy.

That conviction was evident in a statement posted to Kigeli’s website following his death early Sunday morning, which points toward a future decision about “the heir of the Royal throne of Rwanda.”

Kigeli, second from left in the archival photo, became king following the 1959 death of his half-brother, King Mutara III Rudahigwa. His tenure ended in 1961 as Rwanda moved toward independence at the end of Belgian colonial rule.

Kigeli’s life began in the same poverty and exile from Rwanda in which it ended, at least from the perspective of a king who was told by President Paul Kagame two decades ago that he was welcome to return but no longer as a monarch – a scenario that Kigeli never chose.

His own father had died in exile in the Congo during World War II, where the family lived in poverty after Belgian authorities deposed him for being too independent, Kigeli told journalist Ariel Sabar in 2013.

Sabar’s “A King With No Country” offered an in-depth interview with the aging Kigeli, then 76, who reigned for just nine months before he too was forced to flee the Rwanda that would forever remain his home.