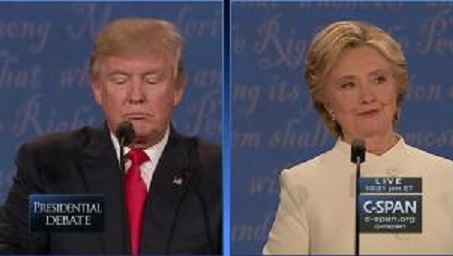 “Has Africa even come up in this debate?”

That’s what one person weighing in on social media wanted to know, and he wasn’t the only one to notice the absence of discussion about African nations and foreign policy during the final U.S. presidential debate.

Watching in the wee hours, some viewers from South Africa, Kenya, Ethiopia and other African nations paid close attention as Republican candidate Donald Trump and former U.S. Secretary of State Hillary Clinton, the Democrat, faced off.

As an unusually divisive campaign moves closer to the November 8 election, Trump and Clinton placed  little emphasis on U.S. foreign policy in this third debate, despite the expectation that it would be a top issue. Rather, both candidates engaged in accusatory personal attacks rather than policy specifics.

More than an hour into the debate, moderator Chris Wallace of Fox News asked about Iraq to begin a few questions on foreign hotspots. Clinton reiterated her opposition to that war, while insisting that Trump clearly was in favor of it.

She took a swipe at her opponent by reminding him that he was on the “Celebrity Apprentice” show while she dealt with the gravitas of Afghanistan, and Iraq and the aftermath of U.S. involvement.

The candidates clashed on Syria, with Trump arguing that many migrants are aligned with Islamic State and a “Trojan horse” threat to America. Clinton said she remains committed to a no-fly zone and its risks, while noting the trauma of millions of people in the region. Trump countered that the world would be better off without the failures of America’s interventionist policy for which he held Clinton responsible.

Apart from an oblique reference to Libya, neither African nations and economies nor climate change and an evolving global future were debate priorities – and it did not go unnoticed.