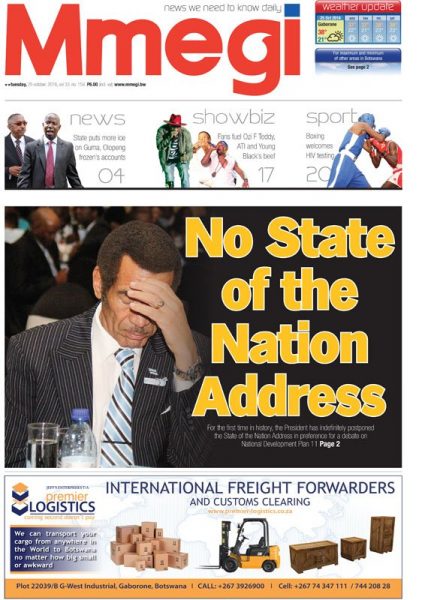 An annoyed Government of Botswana assured citizens Tuesday that President Ian Khama will, in fact, deliver a State of the Nation address in upcoming weeks.

The announcement became necessary after the Mmegi newspaper in Gaborone ran a front-page story that said there would be no State of the Nation speech forthcoming, with a file image of Khama holding his head in his hands. It added that “for the first time in history” the president’s address was indefinitely postponed.

The story prompted Botswanan officials to release an official statement, calling the story “a misleading report.”

Khama’s government expressed disappointment with “this latest instance of false and misleading statements,” and assured Botswanans the address will be given immediately after the Parliament’s consideration of National Development Plan (NDP) 11.

The NDP plan was set to be introduced during a special session of parliament on Wednesday, and will be discussed for at least 24 working days beginning in November, the government said.

The Mmegi news organization is frequently at odds with the president, and is as likely to speculate about Khama’s choice of female companions as it is the nation’s unemployment rate or environmental policy.

The president and his leadership are well-regarded on some issues – his public opposition to Robert Mugabe in neighboring Zimbabwe, for example – while the economy and the ongoing battle over reliable energy are perennial concerns among his constituents.

At the time of this writing, Mmegi did not issue any public comment on why the media outlet suggested there was a shift in Khama’s availability or transparency, with respect to addressing the nation.