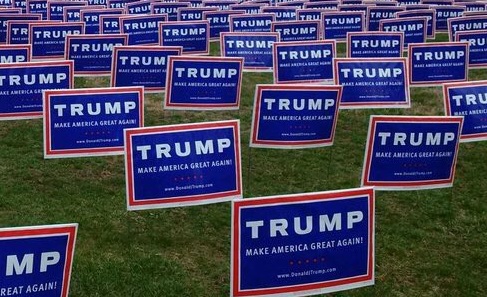 Five opposition party supporters in Uganda marched on the U.S. Embassy in Kampala Tuesday, waving signs in support of Republican U.S. presidential candidate Donald Trump and asking Americans to vote for him.

Two of the five members of the Uganda Young Democrats were arrested, local media reported. Party leadership later distanced itself from the incident, which spokesman Kenneth Kakande said was not authorized by party officials. Kakande told AFP the youths were “perhaps overzealous.”

The small contingent of protesters appeared motivated by perceptions of a Trump commitment to end the power of African leaders he views as tyrannical and undemocratic. At least one of the protest signs equated a vote for Trump with a vote against African dictatorship.

Nearly a year ago, rumors circulated about comments the controversial Trump reportedly made while speaking to an American military veterans group. Some African media outlets said Trump had called out President Yoweri Museveni of Uganda, as well as the aging Robert Mugabe of Zimbabwe, as despots he would plan to arrest as president, while putting an end to dictatorship around the world.

The unverified remarks about Museveni may have helped to shape political views about Trump that informed the youth opinion, but quite to the contrary, most political commentary of late compares Trump unfavorably with those same African dictators who refuse to honor democratic process and remain in office for decades.

During the final U.S. presidential debate, a coy Trump intimated that he may not accept the November election results as valid – leading to an outcry from Africans who encouraged the global real estate developer to see what the consequences of electoral failures and despotic leaders really looks like.