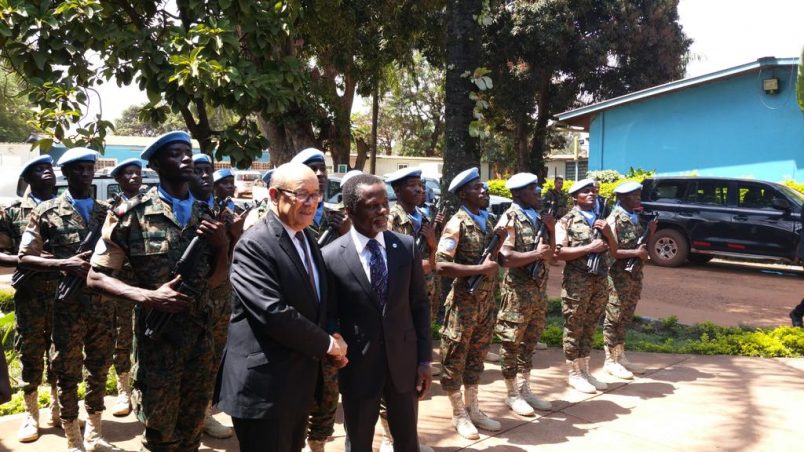 Humanitarian groups warn that violence in the Central African Republic (CAR) has reached levels not seen in a year, as agencies including World Food Programme and the International Rescue Committee (IRC) are being forced to pull back from their missions.

The fatal attacks on civilians and aid workers seen two weeks ago in and around Kaga Bandoro town had sent 5,000 people to seek shelter at the United Nations MINUSCA compound, the IRC said. That number has swelled to 20,000, al Jazeera reports, as fresh waves of attacks left 25 dead last week, raising the total to 65 killed.

The troubling developments come as Jean-Yves Le Drian, Defense Minister of France, announced the end of France’s Sangaris military mission in CAR, an unwelcome development for those who believe CAR needs France to offer more help.

Le Drian met with Touadéra to discuss the transition, and accompanied Parfait Onanga-Anyanga, the UN special representative for CAR, on his visit to MINUSCA headquarters.

The looting and burning, as well as attacks on civilians and NGO workers themselves, reflect a renewed cycle of violence in CAR between predominantly Muslim Seleka forces and Christian anti-Balaka militia.

New fatalities were reported Sunday in Bangui as residents of the town’s primarily Muslim district, fearing ongoing attacks well to the south of Kaga Bandoro, continued fleeing into Monday as well. The crisis has become near-existential, according to a Centrafique Actu editorial that called it the worst that President Faustin-Archange Touadéra has faced since his election in March.

That alarm is shared by the IRC and other aid agencies who have suspended their relief operations amid the violence. “The blatant targeting of humanitarians over the past few months in Kaga-Bandoro has now reached a boiling point and the risks our staff face each day in delivering aid are now beyond any acceptable level,” said Modou Diaw, IRC director for CAR, earlier this month.

The group calls on MINUSCA to protect civilians and restore order so that humanitarian aid can continue.