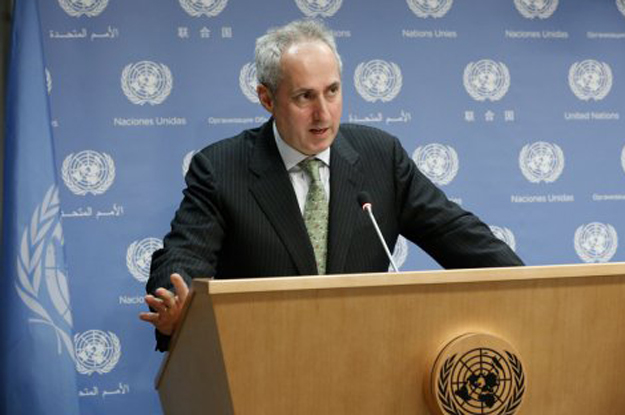 A spokesman for United Nations Secretary General Ban Ki-Moon has stressed the importance of Kenya’s role in South Sudan, while defending the UN report that resulted in Kenya’s swift and unusually strong decision to withdraw more than 1,000 troops from the UNMISS peacekeeping mission.

“We have not been officially appraised of any of these decisions,” Stéphane Dujarric said Wednesday, referring to the statements issued by Kenya’s ministry of foreign affairs.

“We obviously value the contributions of the Kenyan soldiers and police officers in South Sudan and throughout peacekeeping,” Dujarric added. “We will wait to get some official notification before commenting further, but I would add that I think the report does address issues, much broader issues, with the mission.”

The public summary of the report released Tuesday does, in fact, deliver a comprehensive assessment of the July incident, with a number of recommendations beyond the question of UNMISS leadership that has offended Kenya.

The ministry’s statements followed Ban’s decision to replace Lt. General Johnson Mogoa Kimani Ondieki, the Kenyan UNMISS commander since May, in the wake of the investigation into the July attacks in Juba that derailed the fragile South Sudan peace agreement. Ondieki met with President Uhuru Kenyatta immediately upon his return to Nairobi.

The harshly worded response conveyed resentment about the investigation, suggesting that Ondieki is the scapegoat for a “systemic dysfunctionality” that is endemic to UNMISS operations and that Kenya and its military were disrespected.

“The process leading to this unfortunate decision not only lacked transparency but did not involve any formal consultation with the Government of Kenya,” the ministry said. “This demonstrates complete disregard of our key role and responsibility in South Sudan.”

Kenya also said it was pulling out of the Intergovernmental Authority on Development (IGAD) peace process, despite its pivotal role in brokering the 2015 peace agreement between Salva Kiir and rebel leader Riek Machar.

Both the South Sudanese government and SPLM-IO opposition welcomed Ondieki’s dismissal, according to the Sudan Tribune.