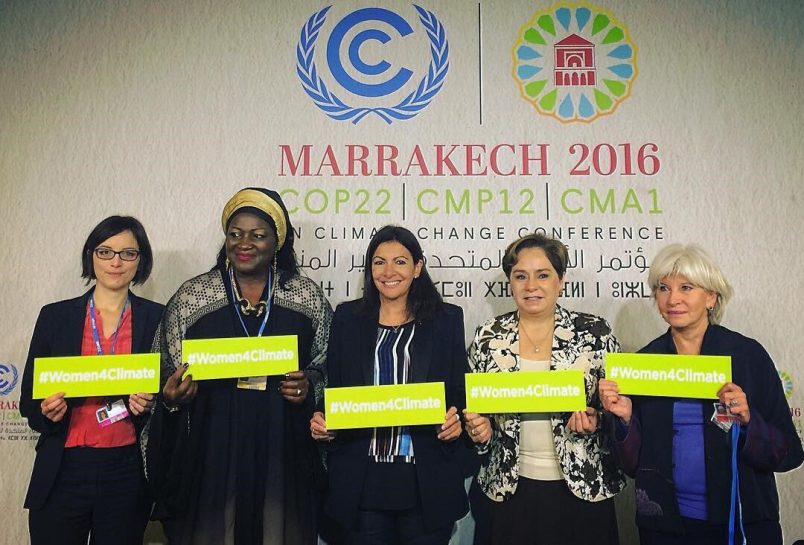 Cameroon’s Celestine Ketcha Courtes, the mayor of Bangangte and a champion on climate issues, was leading the way again Friday as the Women4Climate initiative was launched at COP22 in Marrakech.

Ketcha Courtes joined Mayor of Paris Anne Hidalgo and other women in climate leadership in the effort to empower women to achieve climate action, while emphasizing their role in growing global cities that are the pulse of a carbon-free future.

“Cities are leading the way on tackling climate change and female mayors are amongst the most ambitious in delivering on this issue,” Ketcha Courtes said. “Through powerful initiatives such as the Global Covenant of Mayors for Climate and Energy, we are getting the job done.”

Supporting and celebrating women leaders in climate action will be a key priority for Hidalgo, incoming chair of the C40 Cities initiative, as the group members from 85 cities gather in Mexico City for the C40 Mayors Summit on November 30.

Hidalgo and Ketcha Courtes are at the forefront of tackling climate change in challenging urban centers, and seek to improve wellness and economic opportunity in cities while reducing the risks associated with greenhouse gas emissions.

Moroccan Hakima El Haite, the host country’s environmental minister, noted that women are more vulnerable to climate impacts but also powerful agents of change in their communities. The Women4Climate initiative seeks to tap into that energy, with mayors and mentors like Ketcha Courtes mobilizing women and their contributions in the fight against climate change.

A fact sheet for the Global Covenant of Mayors for Climate and Energy is linked here.