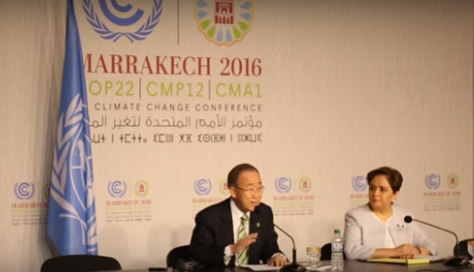 Ban Ki-Moon was in Morocco for Tuesday’s high-level sessions at COP22, but perhaps it comes as no surprise that most of the questions at the Marrakech press conference were about Donald J. Trump, the president-elect of the United States who has denied the reality of climate change as a U.S. priority.

The United Nations Secretary General was both direct and optimistic in his remarks, expressing his confidence that Trump – who he spoke to last week – will come to understand the urgency on climate and the unity with which the international community is resolved to achieve its sustainability goals.

Yet with Trump’s pick of a climate change denier to head his environmental transition team and other leadership decisions, it’s clear that there is uncertainty about the U.S. role in advancing the climate agenda. Ban said he plans another meeting with Trump to discuss his plans for climate action.

“It’s wholehearted commitment by the whole world,” Ban said. “As President of the United States, I am sure that he will understand this, he will listen, he will evaluate his campaign remarks.”