Home>News>Gabon, Equatorial Guinea agree to end territorial dispute over islands
By AT editor - 17 November 2016 at 5:38 am 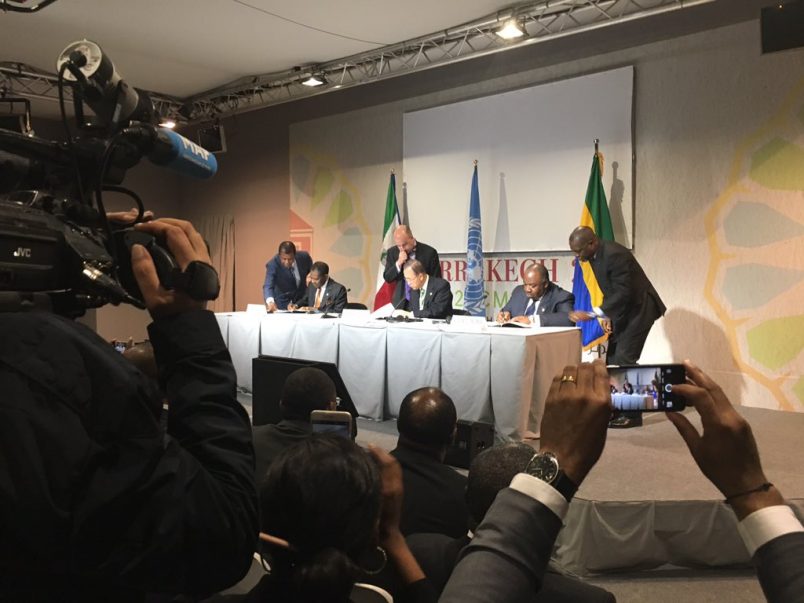 At COP22, the optimism of a sustainable future collided with a trepidation of shifting political dynamics that cast a shadow on Marrakech. Yet there was another positive development that captured less dramatic headlines: Gabon and Equatorial Guinea ended their 30-year dispute over oil-rich territories that both countries claim.

The Gabon-Guinea agreement, signed by the presidents of both nations, was witnessed by United Nations Secretary General Ban Ki-Moon during his trip to the Framework Convention on Climate Change Conference of Parties.

Ban praised President Teodoro Obiang Nguema of Equatorial Guinea – the longest serving ruler in Africa – and President Ali Bongo of Gabon for demonstrating true political leadership that was faithful to the intent of the United Nations charter and mission.

“It is my sincere hope that your commendable efforts will be a source of inspiration for countries around the world facing similar challenges,” Ban said.

The dispute dates back to the 1970s and has lasted during Obiang’s entire tenure. At issue are the Mbanié, Cocotiers and Congas islands in the Gulf of Guinea, the boundaries of which both Gabon and Equatorial Guinea agree will be determined by the International Court of Justice.

The deal comes after a meeting in January that signaled the nations’ resolve to end the dispute with a renewed focus. Morocco has helped to navigate the waters in a mediation role that Morocco World News said will highlight the North African nation’s position and furthers its efforts to join the African Union.