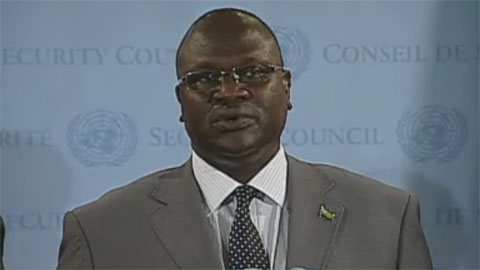 South Sudanese opposition leader Riek Machar, head of the SPLM-IO, was forbidden from entering Ethiopia and returned to South Africa, a spokesman for the rebel group told the Sudan Tribune.

Machar was traveling to the SPLM-IO headquarters in Pagak, near the Ethiopian border, when he was stopped at Bole International Airport in Addis Ababa and detained for several hours. The rebel official said that Machar was given the choice to return to Johannesburg, or face deportation back to Juba.

Thomas Magok Chuol, SPLM-IO representative to Uganda, told the Tribune that Machar had returned back to South Africa safely but gave no reason for the decision.

Conflicting reports, including one from Radio Tamajuz in Sudan, confirm that Machar was denied entry and forbidden to proceed, but that the decision was made in Khartoum on Sunday.

“Dr. Riek left South Africa for Sudan through Ethiopia, so we went and met him at the Ethiopian Airport, and then he proceeded to Sudan, he arrived in Sudan around 12:00 pm, but he was asked to return to where he came from,” said Col. William Gatjiath Deng, also an SPLA-IO spokesman.

The move comes as the United States is pressuring the United Nations Security Council to place sanctions against Machar, along with South Sudanese President Salva Kiir’s army chief Paul Malong and information minister Michael Makuei. The AFP reported Friday that the sanctions would freeze assets and ban travel for the three, in addition to an arms embargo the U.S. has proposed.

In Machar’s case, the sanctions follow on his decisions to declare war against Kiir, a former ally, and try to overthrow the government. Malong, head of the South Sudanese military, has tried to have Machar killed, and Makuei has said that the nation would treat United Nations troops deployed to South Sudan as invaders. The latter also shut down the airport in Juba to keep Machar from returning in spring.