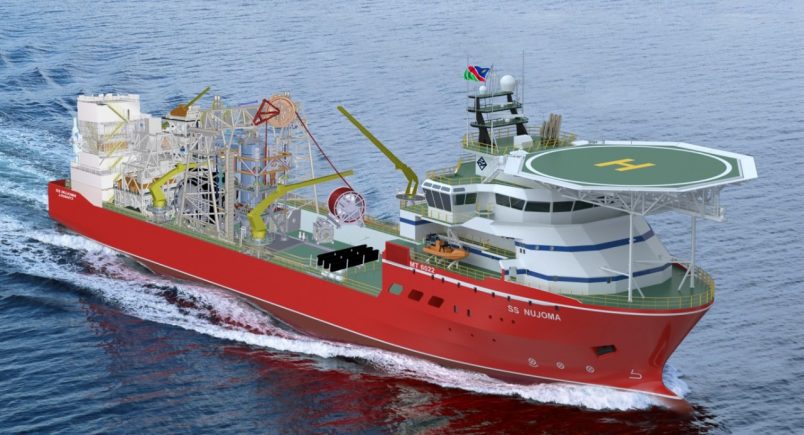 Sea trials are under way for a new deepwater diamond exploration ship, which left the Port of Cape Town for a two-week test of vessel performance before it heads back for final fitting and off to Namibian waters in December.

The mining vehicle SS Nujoma, named after Namibia’s first president, is fully owned by Debmarine Namibia, a joint venture to mine deep sea diamonds owned equally by the Namibian government and De Beers.

Debmarine Namibia is the largest miner of diamonds in the country, accounting for an estimated 70 percent of all diamond production, and the top contributor to Namibia’s national treasury.

The USD $140 million ship joins a fleet of five other vessels that mine waters off the southern coast of Namibia. It will be registered at the Port of Lȕderitz, according to De Beers.

The diesel-electric powered vessel is 113 meters long and 22 meters wide, with a displacement weight of 12,000 tons. The SS Nujoma, with a crew of 80, is designed to stay at sea for three years before returning for maintenance. The marine mining ship can work on ocean floors between 90 and 150 meters below the surface.

It is equipped with a undersea sampling system and treatment plant developed by De Beers Marine South Africa, and a large drilling system that can take up to 48 seabed samples per day. The ship uses scanning sonar, high-tech echo soundings, and autonomous underwater vehicles to map the mining resources. A process plant on the ship is used to screen, scrub and otherwise upgrade diamond-mining product.

The vessel is expected to go into service early next year.