Home>Commentary>Elections in The Gambia: But what happens if Jammeh loses?
By Laureen Fagan - 27 November 2016 at 6:58 am 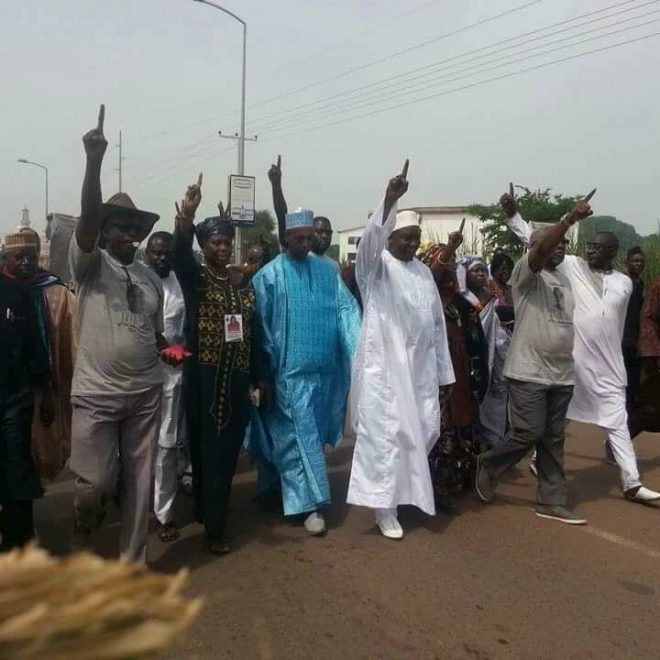 It’s been two weeks since Alex Vines, research director at Chatham House and head of its Africa program, delivered his clear-eyed assessment of the December 1 elections in The Gambia: “There is no chance of an upset.”

Vines, with years of experience at the top-rated independent foreign policy organization, sees no other outcome than a victory for President Yahya Jammeh, the oft-capricious and cruel authoritarian who has remained in office since seizing power in The Gambia in a 1994 coup.

Other observers fully expect Jammeh and his Alliance for Patriotic Reorientation and Construction (APRC) party to remain in power. Momodou Njai, son of Gambia’s Independent Electoral Commission Chairman, Alieu Momarr Njai, told local media that Jammeh has the crowds and he expects a landslide.

The  coalition headed by former United Democratic Party (UDP) candidate Adama Barrow poses no real threat, he says, and the coalition of eight opposition parties came together too late for real impact among the electorate. The Gambia Democratic Party led by former APRC member Mamma Kandeh may perform well, but won’t defeat the favored Jammeh.

“The opposition must accept that they cannot win the elections,” Njai said.

A real possibility for Gambians to end Jammeh’s rule

That opposition, however, believes no such thing – and given the critical crossroads at which Gambians find themselves, perhaps they simply can’t afford to. For the first time in almost 25 years, challengers hoping to oust Jammeh and begin democratic reforms in The Gambia are charged with an energy that is having real impact.

The candidacy of Dr. Isatou Touray, the first woman to run for president – now in support of Barrow and the coalition, after stepping aside earlier this month – helped to ignite voters who want to see progress in Gambian economic and social life. It also attracted support of the NGO Vanguard Africa, an organization dedicated to supporting good-governance candidates across the African continent.

The crowds turning out for this weekend’s rallies, during the final coalition push before Thursday, were massive as Barrow detailed his vision for a three-year national unity government. It would put an end to the repression that is a structural feature of Gambian life: harassment and intimidation, and under Jammeh, the arrests, detentions, torture and death that Gambians fear and global leaders condemn.

Barrow promised a free and independent media, impartial courts, and an end to the impunity of The Gambia’s military and security forces, whose reputation for assassinations and summary executions is extensive. Political prisoners of conscience would be released, and government held accountable.

That vision is resonating with Gambians who increasingly cannot live under a government that controls everything, led by a de facto dictator whose every unilateral proclamation – that he has a divine mandate to lead, that he can cure AIDS, that The Gambia is now an Islamic republic – underscores their lack of stability.

Young Gambian men see such little promise that Gambians have one of the highest migration rates in West Africa. Nearly everyone thinks of leaving or knows someone who has; Jammeh, during a political rally on Friday, promised to put an end to the exodus, a goal that Barrow and the coalition share. For his part, Kandeh says Jammeh has failed the nation’s youth and is responsible for their departure in droves.

What happens if Gambians vote a defiant Jammeh out?

Yet until the human rights of Gambians are protected, Jammeh’s appeals aren’t likely to deter those seeking escape as if that were solely on the basis of educational opportunity or employment, or with threats based on loyalty or Muslim fidelity.

“My presidency is in the hands of the Almighty Allah and no one, not even the Western powers can take it from me except the Almighty Allah,” Jammeh said this week during a rally in Jarra West, in the river interior.

The Daily Observer adds that Jammeh told Gambians he is not a politician, but a servant of God and Gambians, saying he was brought to power by Allah to change the lives and livelihood of the people.

What many Gambians yearn for, though, is a life of opportunity without fear, including during their election process. Their concerns are not misplaced.

Gambian authorities have denied access to European Union election observers, although Reuters reported that African Union observers are permitted. The United Nations High Commissioner for Human Rights this week again expressed concern over the detention of journalists, government officials and opposition supporters who have not seen their families or legal counsel.

“The latest detentions come as 30 members of the Gambia’s main opposition party are serving out three-year prison sentences following their participation in peaceful protests in mid-April,” the UN OHCHR said in a statement, adding that the detentions are in violation of The Gambia’s constitution. Of those earlier arrests including a former UDP party leader, at least two of the other detainees died.

“In the run up to the presidential elections of 1 December, it is particularly crucial that the rights to freedom of expression, peaceful assembly and association are fully respected,” the UN said. This new round of arrests comes against the backdrop of strained relationships with the United States and EU, and The Gambia’s announcement in October that it plans to leave the International Criminal Court.

All of which begs the question: What happens if Jammeh loses the election, however unlikely some see the possibility? The president has made clear that no one can wrest the office from him, within The Gambia or without; the people, on the other hand, are ready for “a decisive change that will usher back democracy, human rights and the rule of law in The Gambia,” writes one commentator.

Jeffrey Smith, the executive director for Vanguard Africa writing for Foreign Affairs, sees this election as the best chance in decades to end the tyranny of Jammeh’s rule. With tensions high, it may be wise to consider what happens if Gambians do exactly that – and what happens next.