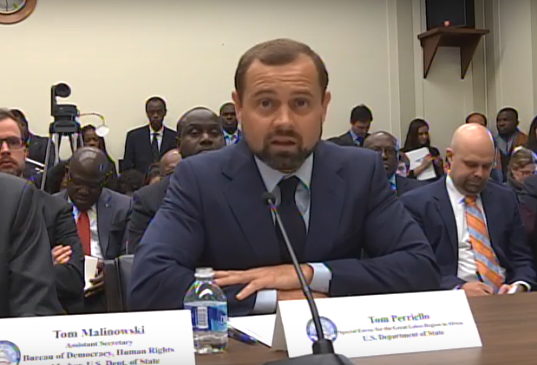 Diplomats and human rights advocates testified before U.S. Congress members on Tuesday during a hearing on the Democratic Republic of Congo. The hearing focused on containing the crisis as President Joseph Kabila refuses to step down from his constitutionally determined term on December 19.

Two U.S. government officials and four speakers from NGOs and academia addressed a bipartisan human rights commission, seeking to learn more about sanctions and other policy options that would curb the violence, deaths, restrictions on media and repression of political opposition in DR Congo.

“If this is settled on the streets, it will be a disaster for the people of Congo,” said Tom Perriello, U.S. Special Envoy for the Great Lakes Region of Africa.

Perriello again confirmed that the U.S. government will consider additional sanctions. The envoy has previously said the international community is ready to impose sanctions beyond those that have targeted Céléstin Kanyama, Gabriel Amisi Kumba and John Numbi.

Sawyer notes that the influential Roman Catholic Church offers a glimmer of hope in negotiating a peaceful outcome to the political impasse, while Perriello is optimistic that there is still time for a peaceful transition.

However, Perriello reiterated that what’s important is that the pathway for moving forward must come from the Congolese people rather than a plan determined by others.

A complete video of Tuesday’s hearing is available at this link.