Home>News>UN's Ban urges peace in phone calls to #Ghana's presidential candidates
By AT editor - 30 November 2016 at 4:18 am 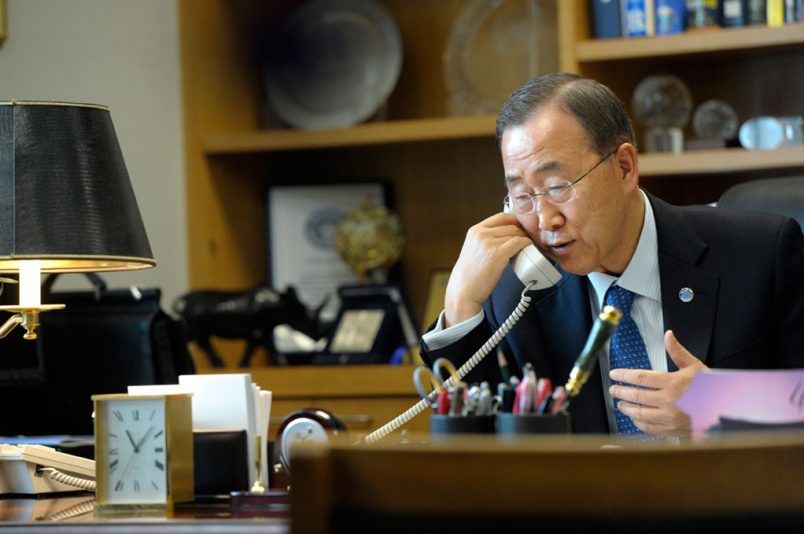 Ban made separate calls to the two leaders to discuss next week’s elections, according to a readout released by Ban’s spokesman.

“The Secretary-General underscored the importance of an environment conducive to peaceful and credible elections, and urged the two leaders to continue their role in defusing tensions and preserving peace,” the statement said.

“Bearing in mind Ghana’s history of political stability and peaceful elections, the Secretary-General underscored the need for all political parties to sign a Code of Conduct, which will greatly assist in lowering tensions and preventing electoral violence.”

Ghana in recent months has seen more politically motivated clashes, including a bomb threat in the Ashanti region against a politician with Mahama’s National Democratic Congress party. Ghanaian security officials and community leaders have spent months identifying hot spots, including locations in Ashanti and other regions outside of Accra.

Last week, the U.S. Embassy in the capital listed two dozen potential trouble spots while urging U.S. citizens to avoid them in the coming days.

The two candidates have vied for the presidency before, leading to bitter sentiment among many Ghanaians when Mahama won the 2012 election with just 51 percent of all votes.

The slim margin was contested, including NPP claims of voting irregularities and election fraud, but the Supreme Court of Ghana upheld the result by a narrow 5-4 ruling.