Home>Articles>Is this feasible? Whether a Turkey model on migration works for Africa – or at all
By AT editor - 4 December 2016 at 8:32 pm 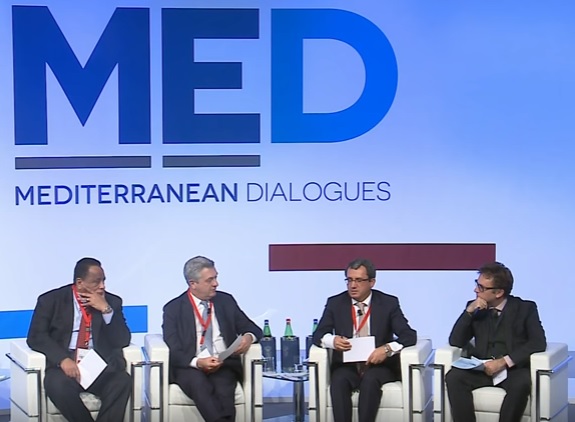 This weekend’s Mediterranean Dialogues in Rome didn’t shy away from the climate of conflict and crisis that Europe, the Middle East and North Africa have known in recent years.

Among the participants was Sudan, and Ibrahim Ghandour, the country’s Minister of Foreign Affairs, was joined by colleagues from MENA states Algeria, Egypt, Libya, Morroco and Tunisia – but also Nigeria – in leading foreign policy discussions hosted by ISPI (Italian Institute for International Political Studies).

The “Beyond Turmoil: A Positive Agenda” theme was particularly evident during a session on migration that put Africa at the center of discussion among high-level attendees from a range of disciplines. That conversation put the spotlight on Turkey and the European Union’s impasse over a migration policy deal that works, and what that means for African countries.

For his part, Ghandour, who met with Italian officials on the MED sidelines Friday to discuss their own cooperation on migration, was joined by panelists Ahmet Yildiz, deputy foreign minister of Turkey, and Filippo Grandi, High Commissioner for Refugees of the United Nations, for a discussion on how Europe and Africa might share a vision based on financial incentives for preventing migrant flows.

It’s one that moderator James Politi of Financial Times referred to as the “grand bargain.”

A view from Turkey and the Mediterranean east

In something of a revisit of last year’s Valletta summit, the panel discussed the viability of border control plans based on economic assistance to origin or transit countries like Sudan. That’s in exchange for met expectations that the waves of migrants arriving in Europe – notably summit host Italy itself – will slow.

“Is this feasible?” asked Politi, noting that the EU deal with Turkey serves as a controversial model, one that by any account isn’t going particularly well.

The EU Parliament last week called for a freeze on Turkey’s membership accession negotiations, with EU member nations in disagreement in how to proceed with a post-coup authoritarian Turkey that was promised €6 billion, visa-free travel and a renewed EU membership track for its cooperation on migration.

That’s unraveled, and a freeze looks increasingly likely ahead of a December 15 summit in Brussels. So Politi’s question takes on new significance as Europe and Africa continue to evaluate a similar pathway.

Yildiz defended the success of the deal in caring for migrants, but made clear that Turkey expects the EU to follow through on its commitments or accept consequences that may include reopening its migrant route.

“When this uprising started as a rightful demand for dignity, for peace, for prosperity, for justice, I didn’t expect this kind of brutality,” Yildiz said of Syria, adding that his diplomatic experience left him nonetheless unprepared for what the world has witnessed.

“As a neighboring country we are trying to handle this refugee issue with generosity, responsibly, in a humanitarian way and with courage.”

Turkey has welcomed 3 million refugees, Yildiz said, and the EU must follow through on its agreements.

A view from Sudan and the African south

Ghandour affirmed the need for close collaboration between the continents and their leaders, with the view that stemming migration means addressing its drivers – and in that sense, the EU solution does as well. He noted that while economic growth across African nations exceeds that of the global average, the benefits are not reaching into African lives marked by poverty, unemployment, conflict, and instability.

“We need close collaboration between Europe and Africa,” Ghandour said. “A united Europe is very important for us, not a fragmented Europe. The latest political changes in Europe we see are very alarming to us.” Policies and leadership changes are all based on combating migration to Europe, he explained.

Having said that, though, Ghandour made clear that a dialogue focused on migration to Europe fails to consider the migration patterns within and among African nations themselves. Sudan is a gateway country – particularly along its Libyan border, which Ghandour says Sudan is controlling at its own expense – but there is conflict or crisis occurring in five of the seven countries it calls its neighbors.

By his count, the people of half of Africa’s countries are witnessing crisis, and simply do not have the resources that Europe is willing to offer them. That’s also true outside of the EU focus on first-ring MENA nations on Mediterranean transit routes, he said: “We are away from the doors, but we are closer than you might think.”

A global view toward the ‘positive agenda’

Grandi praised Europe’s initial efforts to the migrant crisis in 2015, but said UNHCR has come to see them as reactive, fragmented and focused on the short term. “It’s a little bit more challenging to talk about the positive agenda,” he said in a nod to the 2016 MED theme. “We live in a world in which making peace and building peace as well has become very very difficult.”

Grandi affirmed UNHCR’s support for Turkey-like deals with African nations provided they do not prevent people from fleeing risk or compromise humanitarian values and international laws on refuge.

Grandi offered four strategies for resolving the region’s migration crisis. Prevention will require more political and diplomatic work to support fragile states like Somalia, he said. Stabilizing African countries like Kenya and Sudan with targeted and meaningful assistance for those who stay is necessary, but so is the creation of alternative pathways and opportunity for people on the move.