Home>Articles>In Washington, Shoukry discusses Egypt's ties under Trump leadership
By AT editor - 6 December 2016 at 7:35 am 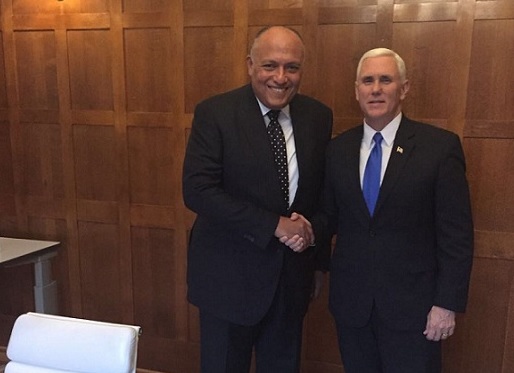 Egyptian Foreign Minister Sameh Shoukry, visiting in the United States, reaffirmed that his country is optimistic about closer ties to Washington under president-elect Donald Trump’s administration.

Shoukry, speaking with PBS News Hour on Monday, said Egypt is hearing “a clear vision” from Trump on the challenges facing the Middle East, the fight against terrorism and a path toward regional stability.

The Egyptian minister has met with U.S. Secretary of State John Kerry and congressional leaders, as well as Vice President-elect Mike Pence, he said.

“On the occasion of my meeting, it was to convey a message from President Sisi,” said Shoukry, who stressed that any concerns about Egypt’s human rights record were not part of his conversation with Pence.

“And there was a general discussion related to conditions in the region and the importance of the strategic relationship that binds the United States and Egypt.”

Egyptian President Abdel Fattah al-Sisi was the first foreign leader to congratulate Trump on his victory, journalist Judy Woodruff noted, and the two heads of state have expressed their praise for each other.

On human rights issues, including the case of Aya Hijazi as well as new restrictions on NGO activities, Shoukry said Egyptian officials “had their own vision of what they considered in the best interests of the public.”

No one has been accused of anything related to freedom of expression or civic responsibility, he said.

To view the entire interview, see the PBS link here.