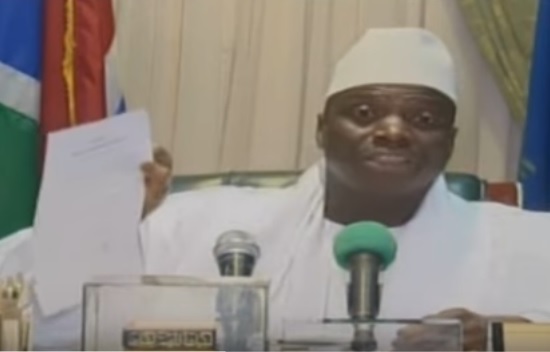 The president of The Gambia, who was defeated last week in elections that gave a clear victory to opposition coaliton candidate Adama Barrow, announced on state television Friday that he has decided not to accept the results.

In a reversal that many analysts saw coming – and yet was stunning nonetheless – President Yahya Jammeh insisted that there were discrepancies in the December 1 vote count.

He announced the electoral commission had made mistakes, discussed “investigations” into why a large number of voters were unaccounted for, and questioned alleged irregularities in voter registration.

Jammeh’s call for a new election was condemned by Gambian citizens and democracy activists, as well as the international community.

“The people of The Gambia spoke unequivocally last week and voted against 22 years of tyranny and dictatorship,” said Jeffrey Smith, executive director of Vanguard Africa. “It’s time that Yahya Jammeh acts in accordance with the rule of law and steps down from power, peacefully and with dignity.”

Smith told Africa Times that the world was energized by the prospect of democracy finally coming home to The Gambia, and that Jammeh was rightly praised for conceding defeat.

“Yet now he has endangered Gambia’s peace and stability,” Smith said. Early reports from Gambia said the power is cut off and soldiers are patroling in various locations of the small West African country.

Senegal on Saturday called for an emergency meeting of the U.N. Security Council, Reuters reported.

The United States issued a statement condemning Jammeh’s announcement. “This action is an unacceptable and reprehensible breach of faith with the people of The Gambia,” it said, “and an egregious attempt to undermine a credible election process and remain in power illegitimately.”

Alieu Momarr Njai, head of Gambia’s electoral commission, certified that Barrow had won with 45.5 percent of the popular vote. Njai noted last week that it was a rare moment in Gambian politics, in that Jammeh accepted defeat.

Jammeh had previously congratulated Barrow, whose election appeared to end a 22-year dictatorship under Jammeh marred by extensive human rights violations, and the erratic claims and policies of their leader.

The repression under Jammeh is a structural feature of Gambian life, characterized by harassment and intimidation, and escalated by the arrests, detentions, torture and death that Gambians fear and global leaders condemn.

Just days ago, political prisoners in The Gambia were released to the jubilant throngs who had voted in Barrow and anticipated his reform vision.