Home>Articles>Training, testing and transport in Africa's fight against pediatric TB
By AT editor - 11 December 2016 at 5:05 pm 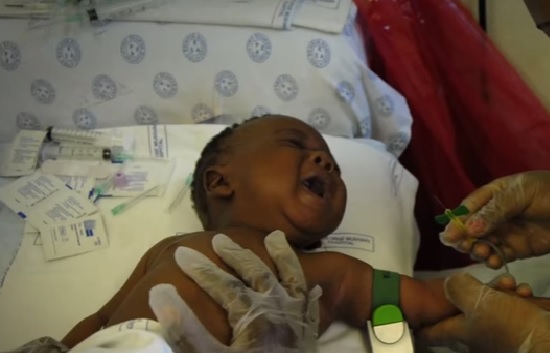 Tuberculosis (TB) accounted for 400,000 of the AIDS-related deaths worldwide in 2015, and is one of the most common causes of death in people living with HIV. The dual epidemics of TB and HIV are particularly pervasive in Africa, where HIV has been the most important contributing factor in the increasing incidence of TB.

In 2015, the World Health Organization reports, there were 10.4 million new TB cases, with Nigeria and South Africa among just six countries that account for 60 percent of them.

There’s been some good news too, especially in the impressive decrease in new HIV infections among children in East and South Africa, where UNAIDS reports a 66 percent decrease in the last five years. Yet in Africa, children most often get TB from the adults around them, and there are a number of challenges that continue to bedevil the diagnosis and care.

The most common form of TB is diagnosed by examining sputum and chest radiography, yet children with HIV may also test negative on sputum microscopy.

More sensitive tests like the GeneXpert, in the MTB/RIF® standard recommended by WHO, are expensive, although they are now becoming more accessible even in remote settings through laboratory networking. Samples are collected from clients and sent to established referral labs with the requisite equipment and technical staff.

However, chest radiography is expensive too, and often not found in rural health center facilities where these children are present. Extrapulmonary TB (TB in parts of the body other than the lungs) often requires even higher clinical skills and laboratory tests to confirm it.

It’s clear that if TB diagnosis in children is missed, it cannot be treated appropriately. Often children presenting with nonspecific symptoms of chronic or recurrent chest infection (cough), wasting, joint pain, meningitis, spinal deformity or paralysis are treated with ineffective medicines that only moderate symptoms, leading to poor outcomes and ultimately to death of children.

Dr. Edward Bitarakwate, Elizabeth Glaser Pediatric AIDS Foundation Country Director in Uganda, says in order to ensure that pediatric TB diagnosis improves, we must meet the need for simplified training in TB diagnosis for frontline health workers, who in most cases form the bulk of primary care providers.

Bitarakwate said training would elevate awareness and the index of suspicion for TB in patients, likely leading to improved detection. Health workers would also need to be trained in simple methods of inducing the production of sputum in children. Yet availability of improved services remains critical.

“Increased access to higher sensitivity diagnostic equipment, for instance fluorescent microscopes as opposed to the ubiquitous light microscopes, and point of care GeneXpert machines,” he said, need to be more widely available. In cases of extrapulmonary TB, methods including biopsy, lumbar puncture to examine spinal fluid, and advanced radiology are necessary at referral facilities.

Bitarakwate, who is leading a program that supports the Uganda National AIDS Control Program (ACP) and TB and Leprosy Control Program (NTLP), said there have been recent efforts to introduce and scale up new point of care technologies for TB diagnosis. Training packages are being adapted in Uganda to train health workers in intensified case finding and pediatric sputum induction.

Successes in Malawi and Lesotho

With one of the world’s highest rates of HIV infection, Malawi is rapidly adapting to international standards when it comes to diagnostics and national HIV services. The strategies have maximized treatment access while minimizing costs.

This means more CD4 lab tests are required for treatment access. Ideally, diagnostics should be at point of care, and there are now point of care early infant diagnosis devices that are being rolled out in Cameroon and other southern African countries, including Malawi.

In Lesotho, during this year’s World AIDS Day commemoration, the Ministry of Health in partnership with EGPAF launched the Early Infant Diagnostic Machines with access in 159 facilities. This achievement means testing that was handled entirely in South Africa – often resulting in lives lost while awaiting results because of the slow process – is a thing of the past, and it is a great milestone for the country.

Transportation is key to treatment timelines

While it is true that Africa may never have all tests and technologies in all facilities, the key is reliable and efficient access to those who need them. The United States has supported labs and transportation systems in Malawi for the past 15 years, while EGPAF is collaborating with Riders for Health to improve transport at available network sites.

For example, there is a critical diagnostic test for infants that typically cannot be done on site. Because of the presence of maternal antibodies, a polymerase chain reaction (PCR) test is required to accurately diagnose HIV in infants. The rapid tests are unreliable in children less than a year old, but the PCR can only be done in a well-equipped laboratory, using sophisticated equipment.

In Malawi, there are seven national laboratories with the capacity to conduct early infant diagnosis (EID). As such, sites and districts send their PCR samples to the nearest of the seven laboratories. Because early initiation of treatment in children is especially critical due to infant mortality with HIV, the EID test and services are very important, as are strategies to ensure transportation of samples is reliable.

While WHO recommends that all HIV-exposed infants are tested within two months of birth, only half had access to early infant HIV diagnostic (EID) screening in 2015 — and only half of those tested ever received the results.

Eric Mittochi, a clinician in Malawi’s Mchinji district at the Zambian border, says process improvements are compressing the timeline.

“Previously, a client would take two to three months to get the results but with an expansion of the laboratory sample transportation network in Malawi, it takes a week,” Mittochi said. “It is timely and enhances quality treatment because some clinical decisions are based on outcome of the results.”

About Owen Nyaka: Owen has been a jounalist since 2001 and worked in a number of print and electronic media including the Malawi’s lone news agency.