Home>News>New UN Secretary General: Fear is driving decisions across the globe
By AT editor - 12 December 2016 at 7:12 pm 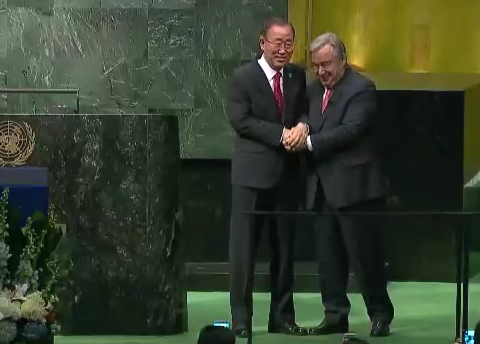 Former Prime Minister of Portugal António Guterres was sworn in Monday as the new United Nations Secretary-General, and called on the world to set aside fear in order to protect human rights and other shared values.

Guterres succeeds Ban Ki-moon, who completes his tenure at the end of December.

The swearing-in ceremony was held during a UN General Assembly meeting in New York that featured a tribute to Ban’s service, with speakers that included Samantha Power, United States ambassador to the UN. Guterres, in his remarks, stressed the rapid global changes that are creating both new challenges and possibilities for the future.

“The world was riding a wave of optimism. The Cold War had ended,” Guterres said, recalling the day 21 years ago when he was sworn in as prime minister of Portugal. “But the end of the Cold War wasn’t the end of history.”

Rather, it was frozen, Guterres said, and history has come back with a vengeance reflected in conflict marked by complexity, a global migration crisis, terrorism and climate change.

The same decades have brought “extraordinary technological progress,” the new Secretary General said, but globalization and technology have also contributed to growing inequality, and deepened the divide between people and political establishments.

“Fear is driving the decisions of many people around the world,” Guterres said.

Guterres, who detailed his priorities and reforms to United Nations processes during the address, concluded by saying that today’s paradox is that despite the world’s greater connectivity, societies are becoming even more fragmented.

“In the end it comes down to values,” he said. “The threat to those values is rooted in fear.”

Guterres was head of the UN High Commission on Refugees for a decade, leaving the office just last year. He has worked extensively with UNHCR and NGOs in Africa and across the globe, and is deeply aware of the complex issues facing the continent, particularly on climate and migration.